London’s Gatwick Airport is using giant barcodes to both cover up construction walls and share information about what’s going on behind those walls. 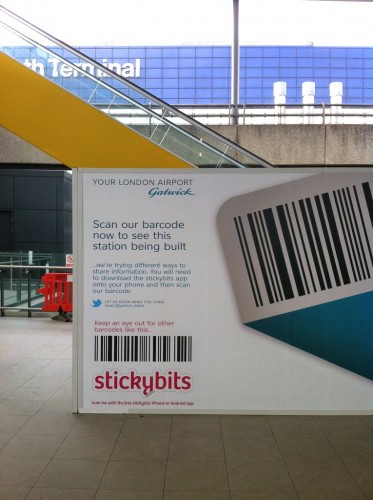 Passengers who scan the codes (using a stickybits iPhone / Android app) will see a short video about the airport improvement program.

The first giant barcodes went up earlier this week in the airport’s North Terminal Shuttle stop, with more to follow. Sleep fast and stretch your travel dollars at the airport

When you’re stuck at the airport, wouldn’t it be great if there was a place where you could take a shower and a nap or just close the door and watch a movie or get some work done?

In some airports there are. A great example is the YOTEL, the short-stay hotel located inside the South Terminal at London’s Gatwick airport.

The brainchild of Simon Woodroffe, a brash British entrepreneur who also created a conveyor belt-style chain of sushi bars called YO! Sushi, the 46-room Gatwick YOTEL offers rooms that are a cross between what you might find in a Japanese pod-hotel and an amenity-rich first-class airplane cabin. But these rooms also include full showers, flat-screen TVs, wireless Internet access and room service.

Travelers can book a YOTEL room for as little as four-hours. So it seems ideal for those times when you’ve just come off a long flight or have a super early departure in the morning. Prices start at about $50 for a standard cabin for the minimum four-hour booking, but during August, to celebrate the GATWICK YOTEL’s first anniversary, overnight stays will go for under $100. Not traveling through Gatwick? There’s a 32-cabin YOTEL in Terminal 4 at London’s Heathrow airport and another YOTEL scheduled to open at Amsterdam’s Schiphol Airport later this year.

So sleep tight – but sleep fast!