I’ve been in Singapore this week checking out – and experiencing – the new pre-security attraction at Changi Airport called ‘Jewel‘.

Housed inside a toroidal (doughnut-shaped) glass and steel structure designed by noted architect Moshe Safdie, the Jewel attraction sits next to Terminal 1 on a piece of land that once housed a parking lot.

Inside there’s a lush four-story tiered garden, more than 280 retail and dining outlets, a Yotel short-stay hotel, and a multi-screen IMAX theater. But the attraction’s centerpiece is without a doubt the 140-foot-tall Rain Vortex that is now the world’s tallest indoor waterfall.

A few ticketed activities in Jewel’s ‘Forest Canopy’ will open in June, including a 164-foot-long glass-bottomed bridge, nets for bouncing and walking above the forest, mazes, topiary sculptures and more.

In addition to global brands such as Adidas, Coach and Levi’s, Jewel’s many shopping venues include a good number of new-to-market shops.

There’s the first Pokémon Center outside of Japan, shops selling gift foods and plenty of Singapore brands, such as In Good Company (clothing) and Supermama (design and crafts items).

From Shake Shack to fine dining

Dining options in Jewel Changi Airport range from fast-food to fine dining and include cuisines from Asian to Western. Singapore’s first Shake Shack (with unique to Singapore menu items) is here as are numerous cafes that offer ‘outdoor’ dining with a view of Jewel’s forest and waterfall.

Many passengers have long layovers at Changi Airport or have many hours to wait between hotel check-out time and late-night flights.

For those passengers Jewel has early check-in counters, bag storage facilities and a pay-per-use lounge.

But the best bonus amenity by far is the YotelAIR hotel.

The newest in the Yotel chain of “cozy” in-city and airport hotels, the YOTELAIR in the Jewel Changi Airport has 130 cabin-sized short-stay rooms.

Each room has its own shower and toilet, TV, WiFi and a space-saving ‘Smartbed’ that can change positions at the push of a button.

There’s a gym for guests, but during my four-hour stay I discovered that the best part of this YOTELAir is the patio that sits out front. It was a perfect, private spot to have a coffee, gather my thoughts, view the waterfall, the forest and all the shoppers going by. I’m a big fan of the Yotel chain, having stayed in their affordable, cruise cabin-inspired hotel rooms at London’s Heathrow Airport, at the Paris CDG Airport and in New York City.

Room are on the “cozy” side (“Premium” cabins at CDG start at 97 square feet) but have everything you need : free Wi-Fi, a flat screen TV, a cool retractable bed that turns into a sofa at the touch of a button, private shower and bathroom, work space, lots of power sources and cool lighting.

My most recent Yotel stay was at the brand new Yotel Boston. Located in the super trendy Boston Seaport neighborhood, the Yotel Boston is on one of the first few stops of the (free!) Silver Line bus that goes into the city from the airport and is right next door to the station.

Rooms look much like other Yotel rooms, but have a few fresh twists. Layouts start at 152 square feet and include an updated bathroom layout with monsoon shower head and some creative storage and roll-out work surfaces.

The public spaces are charming as well. Guests can have a drink or a meal at the lobby bar or duck into one of the work spaces for a quick meeting. There’s a well-equipped fitness room and an already very popular rooftop bar.

The Yotel chain started out as an in-airport amenity, and now offers short-stay cabins at London’s Heathrow and Gatwick Airports, in Amsterdam’s Schiphol Airport and at Paris Charles de Gaulle Airport. In addition to the Boston Yotel, there is an in-city Yotel in New York and branches set to open in San Francisco and Singapore.

(My Yotel stay was booked at a media rate.) 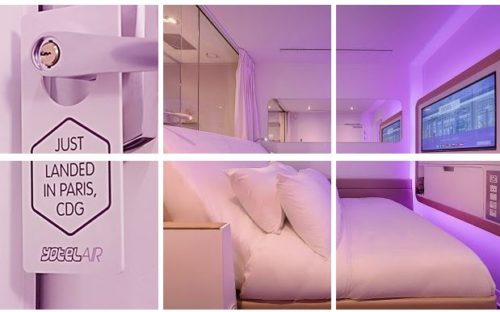 There are Yotels in London at both Heathrow and Gatwick airports, and one in Amsterdam’s Schiphol Airport.

There’s also non-airport Yotel in New York City and a few more in-city Yotels planned, including in Boston and Singapore.

I’ve stayed at the Heathrow Yotel when it first opened and more than once at the in-city Yotel in New York City.

With the November opening of a Yotel post-security at Charles de Gaulle airport – in the Terminal 2E transit lounge area known as ‘Instant Paris’ – Yotel has rebranded their airport properties as YotelAir (makes sense) and added some fresh new amenities.

In addition to the amenities inside the rooms -space-saving adjustable beds, bathrooms with monsoon rain showers, mood lighting, Wi-Fi and HD TVs, in the hotel’s public area there’s a vending wall for drinks, snacks and travel essentials and a lounge with complimentary hot drinks.

I’ll be visiting and, hopefully, staying at this new Yotel in early February, so will share a full report then. If you’ve ever spent a few hours at a Yotel in Heathrow, Gatwick or Amsterdam’s Schiphol Airport, then you know these short stay hotels with compact rooms are a blessing for those who need to nap and recharge after a long flight or be at the gate really, really early in the morning.

There’s an off-airport Yotel in New York City that still has compact rooms, but it operates more like a ‘regular’ hotel, with full day rates, a restaurant and a place in the lobby to store luggage.

But luggage storage is unusual in that there’s a giant robotic arm – called the Yobot – that puts luggage in a lobby vault and retrieves it when asked.

Yotel is turning the Yobot into YobotSanta this season: the Yobot may bring guests staying at the Yotel New York a gift from the vault before storing their luggage – and YobotSanta is also giving away gifts online.

You can choose a virtual YOBOT bin each day for a chance to win a range of travel surprises, such as round-trip travel certificates on JetBlue, two-night Yotel stays in New York and luggage and travel accessories from Flight 001.

I’ve been keeping an eye on Yotel ever since my short stay inside one of the hotel brand’s tiny short-stay “cabins” at London’s Heathrow Airport.

So I was especially interested in working on this story for CNBC about how crowdfunding is being incorporated into the fundraising plan for a Yotel to be built in San Francisco:

The online money-raising craze that made possible both the Pebble smartwatch and the Oculus Rift virtual reality system is now becoming a trend in the hotel hospitality industry.

Crowdfunding is being used to help raise funds to transform a historic building in San Francisco’s gentrifying Mid-Market neighborhood into a hip, high-tech YOTEL-branded hotel.

If all goes according to plan, the antiquated office building will soon become a 203-room hotel. It will be the city’s first hotel partly financed via crowdfunding and will be located just blocks from the headquarters of tech heavyweights Uber and Twitter.

“We thought crowdfunding a small portion [10 to 15 percent] of the equity on this deal would fit with the ethos of the neighborhood, given the demographic of the young, millennial, tech-heavy crowd that is there day-to-day,” said Justin Palmer, Synapse’s CEO.

“It’s a good way to encourage local buy-in on the project,” said Palmer. “These people can reap investment benefits as owners and also actually visit the property, go to the restaurant, the roof top bar and get owners’ discounts on room rates.”

Synapse isn’t the first company to crowdfund a hotel, however. In 2014, the Hard Rock Hotel in Palm Springs used the platform to raise $1.5 million to help refinance and renovate the property. For a minimum investment of $10,000, individuals became equity owners and received a package of VIP guest perks.

Real estate crowdfunding site RealCrowd is hosting the YOTEL San Francisco offering, which is open to accredited investors. In addition to equity ownership, investors are being offered Kickstarter-type perks, such as t-shirts, annual parties and personalized perks at investment tiers starting at a minimum of $25,000.

“They’re trying to marry the concepts from the last generation of crowdfunding, when you were just a supporter to being also an owner,” said Mitch Roschelle, partner and real estate advisory leader at PwC, “but there are a lot of complicated security laws you need to deal with.”

A lot of those security laws are still quite new, dating back to the Jumpstart Our Business Startups (JOBS) Act, which was signed into law in April 2012. That eased some fundraising and advertising restrictions for small companies.

With real estate crowdfunding growing globally, from $1 billion in 2014 to a projected $2.5 billion in 2015, Roschelle thinks it’s a growing trend — and one that makes sense for hotels.

“A lot of crowdfunding has been in the intellectual property space, for movies and start-up businesses,” said Roschelle. “It was inevitable that crowdfunding would make its way to properties where investors could visit or even stay at the very place they funded.”

According to Crowdnetic, which tracks crowd financing, since September 2013 there have been over 300 securities-based crowdfunded real estate development and investments offerings out of 6,260. Twelve of those have been for hotel properties.

Of that number, “10 … have been successful, and I would not be surprised if the early successful hotel offerings spurred other hotel and lodging properties to come on board with this still-new capital-formation tool,” said Janet Rosenblum, Crowdnetic’s director of research.

Synapse’s YOTEL underscores how the real estate industry is grappling with major changes in how to build and finance projects.

“With technology and the regulatory changes, there’s been a transformational shift in how people manage their money,” said Adam Hooper, co-founder and CEO of RealCrowd, “We’re still building a stadium and I don’t even know if the game has started yet.”