According to a newly released report from the Centers for Disease Control and Prevention, at many of the world’s busiest airports travelers continue to be explosed to second-hand cigarette smoke, which the Surgeon General has declared a health risk at any level of exposure.

The report, published this week, found that as of August 2017 more than half (27) of the world’s 50 busiest airport still allow smoking in certain areas, while 23 (46 percent) were smoke-free.

Among North American airports on the list of the 50 busiest, the CDC report found that 14 of 18 had a smoke-free policy, but that Atlanta, Denver, McCarran International in Las Vegas and Mexico City International airports still permit smoking in some areas. (Washington-Dulles, a busy hub, but not among the 50 world’s busiest airports, also has smoking areas.)

Denver International, the report notes, closed three of its four smoking indoor smoking rooms in the past few years and is scheduled to snuff out the final one in 2018 when its lease expires. And while it is not among the 50 world’s busiest airports, the report mentions that Salt Lake City International, a large-hub U.S. airport, also recently implemented a smoke-free policy.

But while Beijing Capital International Airport, the world’s second busiest airport, is smoke-free, “Sadly, Las Vegas, Dulles and Atlanta have not budged on going smoke-free,” said Cynthia Hallett, president and CEO of Americans for Nonsmokers’ Rights.

Officials at Atlanta International, the world’s busiest airport, say they are well aware of the calls to create a smoke-free environment at the airport, but have no plans to close their smoking areas.

“Creating a smoke-free policy would force smokers to find locations throughout the airport to light up and expose other guests to secondhand smoke,” said ATL spokesperson Andrew Gobeil, “And smokers might move outside the terminal and create an additional burden on security lines as those passengers re-enter screening areas.”

Inconvenience aside, “Millions of people who travel through and work in airports that allow smoking are unnecessarily exposed to secondhand smoke,” said U.S. Surgeon General Jerome Adams, “Smoke-free airports can protect people from this preventable health risk.”

My story about smoking at airports first appeared in a slightly different form on USATODAY’s Today in the Sky. According to recent report from the Centers for Disease Control, the smoking rate in the U.S. is on the decline: in 2015, 15 percent of U.S. adults smoked, down two percent from 2014 – the biggest decline in more than 20 years.

That may be one of the reasons Salt Lake City International Airport, which for years promoted its five post-security smoking rooms as a convenience for smokers making connections, has announced a schedule for snuffing out those lounges.

“This is first and foremost an issue of public health, both for travelers and our airport employees,” Salt Lake City Mayor Jackie Biskupski said in a May statement announcing the closure.

But she also noted that the “beyond capacity” airport was in dire need of the extra space.

“[E]very foot of available space should be used to the best advantage of the traveling public,” said Biskupski, citing retail space, charging stations and extra seating as possible uses for the 1,200 square feet that will be freed up by the closure of the SLC smoking lounges.

Going forward, the Salt Lake City mayor noted that smoking rooms are not included in the current designs for the airport’s $1.8 billion terminal remodel program, which has a scheduled phase one completion date of 2020.

“I fly frequently through SLC on business and use the rooms every time,” one passenger wrote in an email shared by airport authorities, “I figured this day would come…What a let-down.”

Public health advocates and other organizations are applauding the airport’s decision.

“It’s estimated that the annual health care costs directly caused by smoking in our state will reach $542 million this year,” said Carlisle, “not to mention the $355 million in costs from smoking-related lost work productivity.”

We've had #SmokefreeSkies since 1990 in the US & now we're closer to #SmokefreeAirports. Congratulations on going smoke-free, @slcairport!

In May, 2015 Murthy has post a thumbs-down photo standing outside a smoking room at Hartsfield-Jackson Atlanta International Airport.

#MadMen ended, and this should, too. World's busiest airport can be its healthiest. Make #ATL airport tobacco-free! pic.twitter.com/nApuIJuixk

After years of insisting that the smoking lounges inside its terminals were an important service amenity for travelers, Salt Lake City International Airport has reversed position and announced that it will phase out the available use of the five lounges currently at the airport in a six-month plan beginning on July 5.

First to go will be the smoking room in Concourse D, with the final smoking lounge scheduled to close on December 19.

SLC has a $1.8 billion Terminal Redevelopment Program underway and it was also announced that there are no smoking lounges in the new plans.

“This is first and foremost an issue of public health, both for travelers and our airport employees, but it is also an issue of space concerns,” said Mayor Biskupski, on the closure plan. “The current airport terminal is also beyond capacity, and every foot of available space should be used to the best advantage of the traveling public.”

Closing the smoking rooms might not only help Utah reduce health care costs and lost productivity related to smoking, it will also free up more than 1,200 square feet in the concourses for other purposes, such as retail space, charging stations for electronics and extra passenger seating, the mayor’s announcement noted.

Here’s the schedule for closing the lounges:

McCarran International in Las Vegas, Hartsfield-Jackson Atlanta International Airport, Denver International and just a few others are now the only major U.S airports with smoking lounges in the terminals. One of my long-running freelance projects is the At the Airport column for USA TODAY.

Here’s a list of the columns that ran during 2015. If you’ve got a suggestion for a topic I should cover in 2016, please drop me a note. 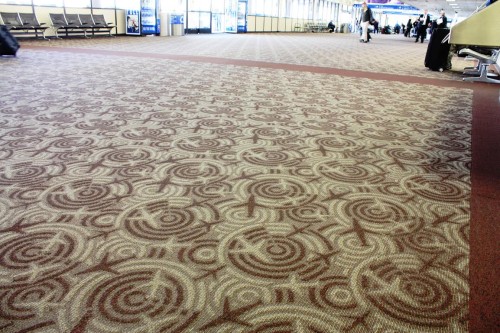 February 2015: Aerotropolis: are airport cities the wave of the future? May 2015: California airports deal with drought

June 2015: Take a hike: airports with the longest walks between gates