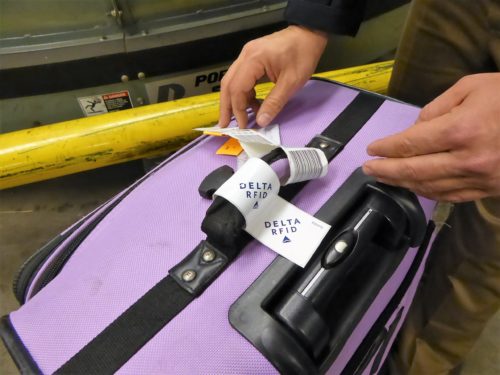 Snaps from a visit to an airport bag well As part of research for an upcoming story, I spent two days visiting the ‘bag well’ at Seattle-Tacoma International Airport finding out what happens to your checked lugagge once you hand it over to your airline.

The short version: your bag travels on a freeway-like conveyor system that sends the bag to and through a TSA explosives detection machine and then back to the airline for sorting so can be sent to your airplane and loaded onto it.  The bag tag is scanned multiple times along the way to keep tabs on its whereabouts.

Here are some snaps from my adventure. Stay tuned for the full story. Souvenir Sunday: a journey with “Luggage” On my travels this week I’ve been toting a review copy of Susan Harlan’s book, Luggage, which is part of Bloomsbury’s charming Object Lessons series.

The slim book is travel-sized, but densely-packed and Harlan has stuffed it with stories and side-trips that touch not just on the actual history and development of suitcases, bags, trunks, carry-ons and valises, but on the role baggage plays in literature, art and films.

“It contains all of her desires,” writes Harlan, and is a “powerfully enabling object” from which the nanny is somehow able to produce a lamp and a mirror (in the 1964 Disney movie) and, in the novel by P.L. Travers, everything from an apron to an armchair.

Poppins’ luggage was not only magical, notes Harlan, it gave her freedom. “She can come and go as the wind changes, which would hardly be possible with a steamer trunk,” Harlan writes.

In “Luggage,” Harlan tells us about her own collection of vintage luggage, a bit of how she and others approach packing and of her visit to to Alabama’s vast Unclaimed Baggage Center, which is not just a store but a tourist destination.

Along the way she unpacks the role and relationship baggage has to everything from home and gender to class, memory, loss and, of course, travel.

“The history of luggage is the history of travel: how we traveled, and why, and where, and what we have packed,” Harlan tells us at the beginning of this journey, “It is virtually impossible to think of traveling without luggage.”