Next time you’ve got some time to spend at London’s Heathrow Airport, take a moment to read some of the commemorative signs the airport posted to mark its 70th birthday in May, 2016.

There are 70 of factoid-filled signs throughout the terminals, marking everything from where the The Beatles were met by screaming fans (repeatedly) in the 1960s to where film scenes were shot and where the Concorde last landed at Heathow in 2003.

You’ll find a list of the contents and locations of all the signs in Terminal 2, Terminal 3, Terminal 4 and Terminal 5 on the Heathrow website.

The copy on the signs ranges from cute and corny to cheeky.

In Terminal 2 departures, one sign marks the spot where actor and pilot John Travolta landed his Boeing-707 in 2002. “He had recently completed his flight training. Fact, not pulp fiction,” the sign notes.

In Terminal 4 departures is  the spot from where Muhammad Ali flew, “like a butterfly,”  in 1974 to fight George Foreman in The Rumble in the Jungle.

And in Terminal 3, a sign notes the spots where the opening sequence in the film “Love Actually” was filmed.  “Think of here whenever you feel gloomy,” Heathrow advises..

Thanks for visiting StuckatTheAirport. Subscribe to get travel tidbits just about every day.

The reels were put together by the Lynn and Louis Wolfson II Florida Moving Image Archives at Miami Dade College and the reel filled with celebrities arriving at MIA from the 1950s through the 1980s is especially fun to watch.

By showing this reel of clips – and the other below, “We are hoping that passengers and airport staff would be delighted to see how the airport and city looked years ago. It’s a real treat to contemplate, through these images, that Miami has a long history of aviation and airports, especially when you consider that Miami is a relatively young city – founded in 1896,” said Gendry Sherer, MIA Fine Arts and Cultural Affairs Director, “Also, I think it’s quite enjoyable to see for instance the Beatles, Frank Sinatra and all these other celebrities arriving and departing from MIA, but most interesting is just seeing everyday people at the airport or seeing families enjoy a day at the beach – normal activities locals and travelers still enjoy today.”

On February 7, 1964 Beatlemania arrived in the United States in the form of John, Paul, George and Ringo stepping off Pan Am Yankee Clipper flight 101 at New York’s Kennedy Airport.

They’d flown over from London Heathrow Airport, were greeted by 3,000 screaming fans and two days later appeared on the Ed Sullivan Show for the first time. 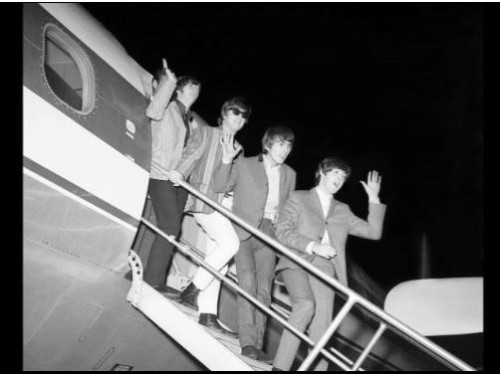 The Beatles’ first visit to the United States began 50 years ago today, on February 7, 1964, with their arrival at New York’s JFK International Airport on Pan Am Flight 101.

Two days later, the Fab Four performed on The Ed Sullivan Show to a TV audience of 70 million people – most of them screaming young girls and their alarmed parents.

There will be concerts, exhibits and other special events taking place around the country this weekend to mark the milestone of the first Beatles invasion in the U.S, but it kicks off at JFK Airport this morning when the Port Authority of New York & New Jersey unveils a historical marker at the landmark TWA Flight Center (in the airport’s Central Terminal Area) paying tribute to The Beatles’ arrival and first press conference in the United States.