The event began 11 years ago in Australia when the iconic opera house was illuminated in green on March 17, 2010. Now the list of participating Global Greening sites is incredibly long and includes returning classics such as the Leaning Tower of Pisa, Niagara Falls, Victoria Falls, the ‘Welcome’ sign in Las Vegas, the London Eye, the Sky Tower in Auckland, and the Prince’s Palace of Monaco.

Here are some of airports and other places we found that are already turning on the green lights. If you know of an other airports that will be joining in, let us know and we’ll add them. Take a look, too, at some of the green-lit landmarks in the St. Patrick’s Day video below narrated by Liam Neeson. Chicago’s O’Hareand Midway  airports will be celebrating St. Patrick’s Day with Celtic dance and musical entertainment, as well as “Shamrock Specials” at airport restaurants and shops.

Today  – (Thursday, March 13) from 5 to 6 p.m., dancers from the Sheila Tully Academy of Irish Dance will perform at O’Hare International Terminal 5, post security and just outside of the new duty free store.  At Midway, Catherine O’Connell will sing with musicians at Reilly’s Daughter, located in the Midway Boulevard Food Court at 5 p.m. The fun continues Friday, March 14 with performances at O’Hare and Midway by the  Trinity Irish Dancers.

Here’s the schedule for O’Hare:

At Midway, the dancers will perform from 4 to 6 p.m. post security in Concourse A near the Battle of Midway exhibit.

And on St. Patrick’s Day, Monday, March 17, concessions throughout both airports will offer “Shamrock Specials” that will include green beer, green kettle corn and discounts on green merchandise and Celtic jewelry. London’s Heathrow Airport is celebrating St. Patrick’s Day with some jigs, courtesy of the O’Sullivan School of Irish Dancing. The children, aged 6 – 16, welcomed passengers arriving into Terminal 5 before taking off to the World Championships in Dublin.

Passengers traveling through Heathrow’s terminals today will also be treated to live performances from Irish Folk bands the Long Notes and Beckett Duo.

At Dublin Airport, the whole dang place is green and will be continue to be bathed in green light every evening through Tuesday to celebrate St Patrick’s Day and The Gathering 2013, a year-long celebration of Irish culture. Dublin Airport will also have choirs, traditional Irish groups and local schools on hand to celebrate St. Patrick’s Day weekend and both airport terminals are decked out with 11,000 balloons and bunting.

Airports and airlines will be joining in on the St. Patrick’s Day festivities.

In Chicago, concessionaires at O’Hare and Midway International Airports will offer St. Patrick’s Day specials for travelers on Friday, March 16 and Saturday, March 17.

At O’Hare there will be green beer – on Saturday only – at all 23 HMSHost locations that sell tap beer, including Chili’s, Macaroni Grill (Terminal 3), Tuscany Café (Terminal 1) and the Prairie Tap (Terminal 3).

Green tea will be on tap all weekend at Argo Tea (Terminals 2 and 3).

The O’Hare Bar & Grill (Terminal 2) will be serving corned beef and cabbage and, over at Vosges Haut-Chocolat (Terminals 2 and 3), you’ll find Guinness Truffles.

At both airports, all McDonald’s locations will offer Shamrock shakes and Nuts on Clark will feature green popcorn. 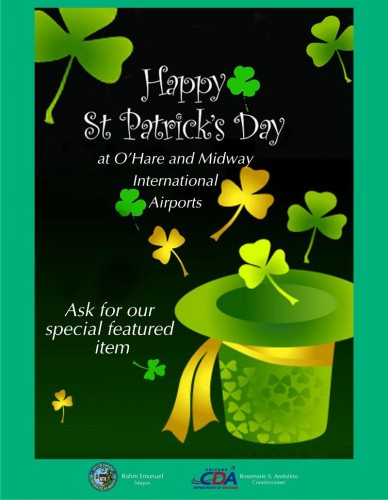 Not going through Chicago?

Economy cabin passengers flying on Delta Air Lines between New York and Los Angeles, and between New York and San Francisco on March 16 will receive complimentary headsets and a cocktail, while those flying the BusinessElite cabin will get a “lucky chance” to win a set of round trip tickets to Ireland.