We adore the rolling little “Ask me!” robots some airports have hired to answer questions and help passengers find their way around.

But they seem more entertainment than essential.

But thanks to the pandemic, robots are getting a promotion at many airports – as super cleaners.

Robots clean up before we fly

Airports and airlines are scrambling to get the latest technology in place to keep terminal spaces and airline cabins disinfected and sanitized.

And robots are doing their part.

In May, Pittsburgh International Airport (PIT) and Pittsburgh-based Carnegie Robotics put a pair of self-driving, robot floor scrubbers on duty.

These robots use ultraviolet light to clean an aircraft cabin in about 10 minutes.

Other airports and airlines have deployed robot-like tools as well.

This robot is billed as “the only ultraviolet (UV) room disinfection technology proven to deactivate SARS-CoV-2 – the virus that causes COVID-19.”

SAT says the LightStrike uses environmentally-friendly pulsed xenon and can disinfect an area in less than 10-15 minutes without warm-up or cool-down time. They plan to use it pretty much everywhere in the airport, including jet bridges, gate areas, ticketing counters, baggage claim, concessions, elevators, and restrooms.

And it looks like the LightStrike robot is here to stay. SAT airport plans to have a contest to give the robot a name.

Here’s something that may help.

JetBlue will start offsetting carbon dioxide emissions (CO2) from jet fuel for all of its domestic flights beginning in July 2020.

The airline has been covering carbon offsets for flyers during specific promotions.

But with this new announcement JetBlue says it will become the first major U.S. airline to move towards covering carbon offsets fulltime.

JetBlue currently works with Carbonfund.org, a U.S. based nonprofit carbon reduction and climate solutions organization, on offsets. And with this expansion, JetBlue expects to offset an additional 15-17 billion pounds (7 to 8 million metric tons) of emissions per year.

That, says JetBlue, is the annual equivalent of removing more than 1.5 million passenger vehicles from the road.

BWI shows its support for the Baltimore Ravens playoff run

And check out this great amenity from Dane County Regional Airport (MSN) in Madison, WI.

The airport not only has short story dispensers in the terminal, it has loaner books for kids.

Have you seen a great amenity at an airport? If you do, snap a photo and send it along to StuckatTheAirport.com.

Thinking about what to get your family for as a gift this holiday? JetBlue has an idea. 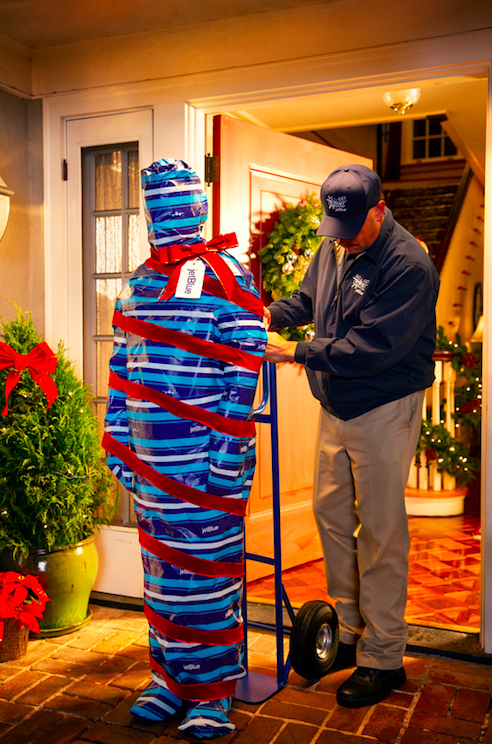 Five winners in JetBlue’s Go Get Gifted contest will get flown home on Christmas Eve (12/24) and then gift wrapped from head to toe for home delivery.

The contest is open through December 12. To enter, go to Go Get Gifted, where you’ll be asked to put in your “shipping” information, including your name, email, departure city and destination city.

You’ll also be asked to choose how you’d like to be gift wrapped, including the wrapper paper print and bow style.

Then you’ll need to come up with a good reason (in 280 characters) why you should be wrapped and delivered.