Want an airport named after you? It’s easy. In Finland

It’s a big deal to have an airport named for you.

In Finland, though, anyone can have Helsinkin Airport named for them. At least for a few moments.

Finavia Corporation, which manages Finland’s airport network has created a way for anyone to have their name put on the front of the Helsinki Airport terminal buildl long enough to snap a selfie or two.

Here’s how to make it happen for you.

Go to www.myhelsinkiairport.fi, put your name in the form, and hit submit.

Your entry will be reviewed to make sure it’s not off-color or inappropriate. And then, depending on how many requests are in ahead of you, your name will appear over the Helsinki Airport sign on the front of the terminal.

We tested it out and filled out the form early morning Finland time from Seattle. Then we watched on the website as our name popped up on the airport sign within seconds.

Unfortunately, of course, we couldn’t get a selfie with our sign because were weren’t standing out in front of the airport in person. But we’re determined to get there so we can get that snap.

In the meatime, we’re declaring this Airport Amenity of the Week. Agree?

Holidays at Airports and in the Air

We’re gathering up news of holiday events and amenities being rolled out by airports and airlines.

Here are a few to round out the week.

Let us know what we’re missing at your airport.

In addition to honoring a native son, the airport name change is expected bring economic benefits to Louisville and both built on and boost Ali-related tourism to the city.

“Even three years after our city’s most famous son’s passing, Louisville continues to see people coming from across the globe to discover and trace Ali’s legacy,” Karen Williams, President and CEO of Louisville Tourism said in a statement, “The airport rebranding supports current marketing efforts to engage in Ali’s ‘Footsteps of Greatness’ as a reason to inspire visitation to Louisville.”

While Louisville added the name of a local icon to its airport’s name, other airports are moving away from celebrity names in favor of stronger geographic branding.

An online petition seeking to honor the late star of the locally produced “Mister Rogers’ Neighborhood” PBS TV program was signed by more than 15,000 supporters. But airport representatives said vacation planners were more likely to search online for “Pittsburgh Airport” than for “Fred Rogers.”

The switch came in 2017 after airport officials realized that while the general public knew that the late Bob Hope was a comedian, few outside the region knew the airport was so located so close to Hollywood and many top Los Angeles-area attractions.

“Some thought the airport was in Palm Springs,” said airport spokeswoman Lucy Burghdorf, “Others thought it was in Vietnam,” because Hope had hosted annual USO Christmas tours to entertain troops during much of the Vietnam War.

To help solve BUR’s identity problem, “We studied what other airports had done and why,” said Michael Fiore, cofounder and chief brand officer of the Anyone Collective, “And for the most part we found the same answers: those with a geographic identifiers attached to them were performing better than others.”

The name-change, coupled with branding and marketing efforts that include everything from new signage at the airport and on highways to online advertising, has garnered the airport national awards and, more importantly, more passengers, said Fiore.

Some other airports have gently tweaked their names in the interest of better branding.

“This decision was made to better identify our geographical location to travelers who are not from this region,” said MKE spokesman Harold Mester, “Our new brand adds the name of our anchor city while still honoring our namesake, Brig. Gen. Billy Mitchell, who is considered to be the father of the U.S. Air Force.”

Next up may be Connecticut’s Bradley International Airport .

“As we continue to market the airport in international and west coast markets, we have found that these populations are challenged to locate us,” said Kevin A. Dillon, Executive Director of the Connecticut Airport Authority, “Accordingly, we are undergoing a review to be completed by the end of the year to determine if it is feasible to change the airport name, and, if so, how we can continue to preserve the memory of Eugene Bradley at the airport.”

While the benefits of geographic branding are convincing some airports to change or tweak names, at least one airport is bucking the trend.

The much-beloved Inouye served as Hawaii’s first representative in Congress in 1959 and went on to represent the Aloha State in both the House and Senate for a combined 53 years.

This is the fourth name change in the airport’s history, notes HDOT.

When it opened in 1927, HNL was named the John Rodgers Airport. After surviving the attack on Pearl Harbor, in 1947 the airport was renamed Honolulu Airport. “International” was added to the name in 1951.

It is too soon to tell if the name change will boost the local economy or increase tourism to Honolulu. But HDOT pegs the cost of new signage, parts, materials, labor and other tasks associated with this latest name change at one million dollars.

What do you think? Should an airport be named for a city or a celebrity? There’s also a long-held tradition of naming airports, airfields and terminals for people with links to aviation history. Here are a dozen to explore. In 1928, San Diego Municipal Airport was dedicated as Lindbergh Field in honor of Charles A. Lindbergh, who took off nearby on May 10, 1927 for St. Louis, New York and then Paris for would become the first, solo, non-stop transatlantic flight.

Today, passengers at San Diego International Airport can see a life-size replica of Lindbergh’s Spirit of St. Louis airplane hanging above baggage claim in Terminal 2 and a 26-inch-tall bronze bust depicting the aviator in his leather flight jacket. (Unfortunately, a popular 30-foot tall mural of Lindbergh – above – with a model of his famous airplane that was applied to the east wall of the Commuter Terminal in 1997 was removed in June 2012 as part of a building maintenance project.) Lucky Lindy is also remembered at Minneapolis-St. Paul International Airport. MSP’s Charles A. Lindbergh Terminal opened in 1962 and was renamed Terminal 1- Lindbergh in 2010. A plaque and a bust honoring Lindbergh, who grew up on a farm in Little Falls, Minn., can be found near the information booth in the ticketing lobby.

Denver International Airport’s main terminal building is named in honor of Elrey Jeppesen, an early airmail pilot whose small black notebook filled with navigational notes about mountain elevations, radio towers, landmarks and possible obstructions gave way in the mid-1930s to a company that printed and sold manuals and charts giving pilots a better way to figure out where they were. Jeppesen, whose Denver-area navigational aid company is now computerized and owned by Boeing, got his first pilot’s license in 1928 (it was signed by Orville Wright) and was the first passenger to deplane from the first flight that arrived at the Jeppesen Terminal in 1995. An exhibit about Jeppesen, who died in 1996, is on Level 6 North of the Jeppesen Terminal and includes a copy of his first pilot’s license as well as his original airmail pilot jumpsuit, leather helmet, and goggles; a larger-than-life-size bronze sculpture of Jeppesen is on Level 5 of the terminal. Chicago’s Orchard Field (the source of the ORD airport code) was renamed Chicago-O’Hare International Airport in 1949 to honor naval aviator Lt. Cmdr. Edward H. “Butch” O’Hare, a Medal of Honor recipient from Chicago who died in World War II. An exhibit in the main hall of Terminal 2 includes a replica of O’Hare’s Grumman F4F-3 Wildcat plane and memorabilia from the era.

Dayton General Airport South, a general aviation facility in Ohio, was renamed Dayton-Wright Brothers Airport (MGY) in 1995 to honor Wilbur and Orville Wright, who worked on aviation projects in town. The brothers’ accomplishments are celebrated at an on-site hangar museum that both displays and flies Wright Model B lookalike planes, along with other historically accurate aircraft. 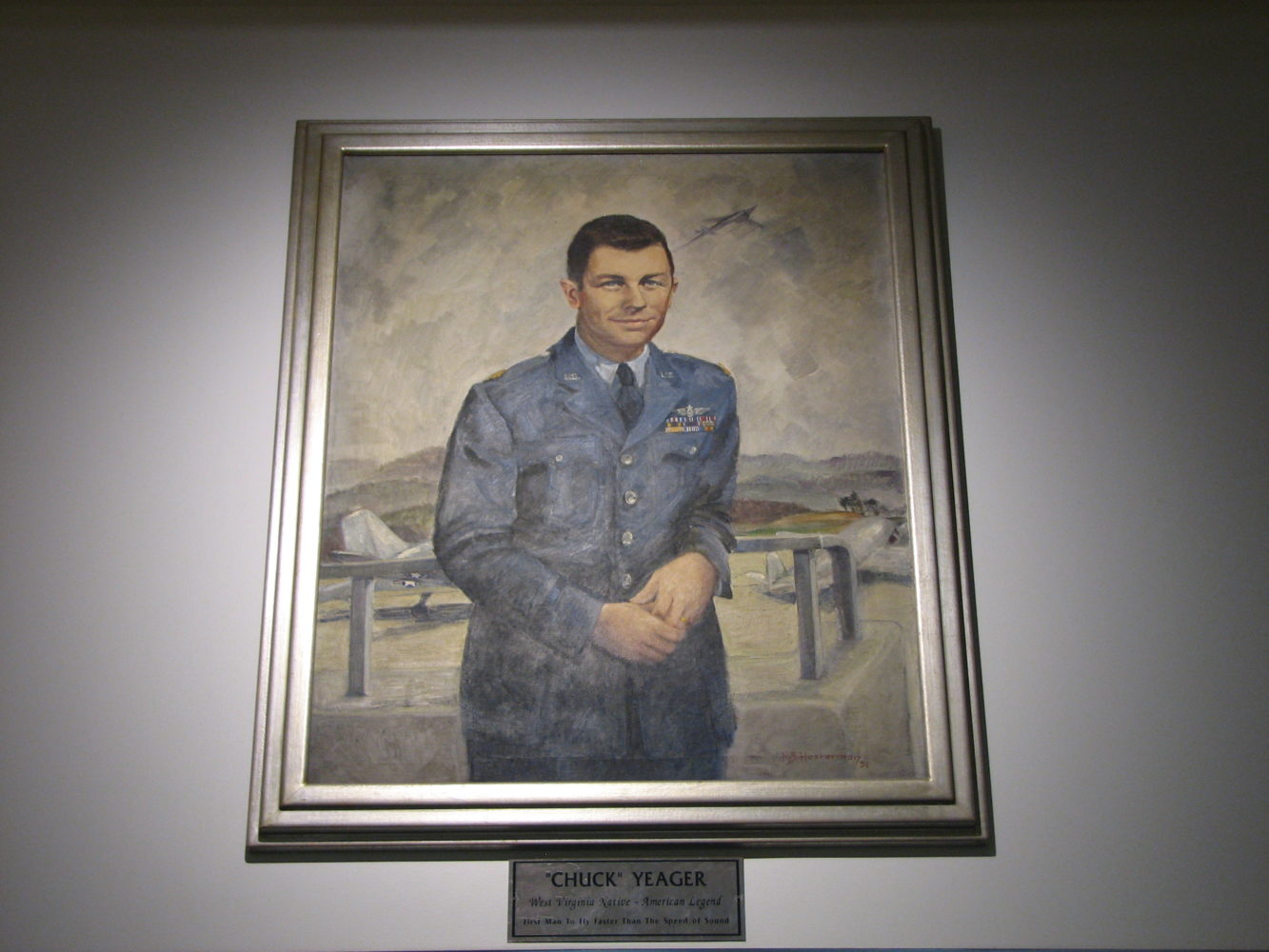 In Charleston, West Virginia, the Kanawha Airport was renamed Yeager Airport (CRW) in 1985 to honor flying ace and retired Brigadier General Charles “Chuck” Yeager who, in 1947 became the first pilot to travel faster than the speed of sound. Travelers will see a bronze statue of General Yeager in the terminal, his portrait in the public area, and a metal art piece titled “Sound and Beyond” on the roadway near the terminal. In Seattle, the King County International Airport, also known as Boeing Field, is named for Boeing Company founder William E. Boeing, while Atchison, Kansas-born aviatrix Amelia Earhart is honored at that city’s Amelia Earhart Memorial Airport. And celebrated pilot and high altitude flight equipment innovator Wiley Post – the first pilot to fly solo around the world – has an airport named for him just outside of Oklahoma City.

Not all airports tagged with names from aviation history get to keep those titles.

Moisant didn’t live in New Orleans, but died in an airplane crash there on the last day of December 1910 while competing in a contest that promised $4,000 in prize money to the pilot whose plane stayed in the air the longest.

Before his demise, Moisant gained fame in 1909 for building and flying the first metal airplane and, in 1910, for taking the first airplane passenger across the English Channel. Along for the ride that day was Moisant’s regular flying companion – his cat. (My story about airports named for aviation pioneers first appeared in my ‘At the Airport’ column on USA TODAY in a slightly different format under the title: What’s in an airport name? Sometimes it’s aviation history.”