Capt. Sullenberger and Amelia Earhart at the Museum of Flight Jay Leno is getting a lot of mileage out of US Airways Flight 1549.

Ok, I’m in. Stuck at the Airport tweets arriving soon

As one of my social media (and life) idols, Benet Wilson, explains in this blog entry, “If you weren’t using some form of social media … when US Airways Flight 1549 crashed into the Hudson River, you were late getting news of the event.” 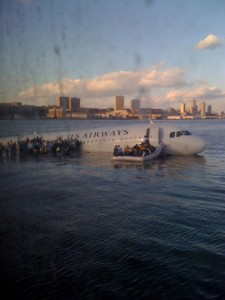 Wilson heard about the crash just moments after it happened via her Twitter account – and was able to stay ahead of the traditional media outlets by monitoring the incredible unfolding of events via “tweets” from folks looking out their windows.

So I’m in. Putting aside everything (lunch, articles due, the laundry) to get my Twitter account ship-shape so that next time anyone here is stuck at the airport – or if I am – we’ll know what’s up.

The fact that everyone got out of the US Airways plane that landed in the Hudson River opened the door for Jay Leno to make jokes about the event.

The Airline Biz blog in the Dallas Morning News was kind enough to post those jokes.

Wow! Miracle on the Hudson Stories about the incredible emergency landing of U.S. Airways Flight 1549 in New York’s Hudson River today are all over the place and it’s an amazing true-life story.

More information will no doubt come out in the next few days, but for now, here are a few links to Web sites with a good round-up of stories about what happened. Newsday.com has articles, videos, and a photo gallery of more than 70 images. The New York Times has even more extensive coverage, including regular updates about the status of the plane, including information about where the plane is tied up (“along the promenade south of Chamber Street and north of Battery Park City, near Warren Street…”) and a phone number for people to call if they find anything that might belong to any of the passengers.

And what have we all learned from this?  Pay attention to the pre-flight safety instructions.