And this year, as in others, there will be a good representation of travel companies vying for eyes during the games.

This new commercial is online now and set to air during the second quarter of the Super Bowl on Sunday, February 13, 2022. In it, Freeman tells us about the concept of Pangea and the theory that millions of years ago there was a single and connected supercontinent. The commercial features plenty of enticing airplane interior shots (Freeman does not fly economy) as well as computer-generated animation scenes showing continents and landmasses reconnecting.

If you’re curious about some of the other commercials Turkish Airlines has debuted around Super Bowls, we’ve added a few below.

Art museum inside an airport lounge

Here at StuckatTheAirport.com, we’re big fans of art in airports.

And art in airline lounges is a nice bonus for those who have access.

A new addition to the list of airline lounges with great art is the Turkish Airlines Lounge at the new Instanbul Airport.

Turkish Airlines says the 1,400 square-foot exhibition titled, “A Selection from the Istanbul Museum of Modern Art Collection” will change three times each year at year and include artworks ranging from the early 20th century landscape painting tradition to the abstract paintings of artists looking for a synthesis between eastern and western arts during the 1950s.

If you take a moment – and have access – you’ll find great artwork in airline lounges elswhere. Some of my favorite pieces are in the Delta Air Lines Sky Club at Seattle-Tacoma International Airport.

This work, by Rebecca Coles, not only look great, if you look closely you’ll see that it is made entirely of recycle postage stamps.

Spotted some great art in an airline lounge? Tell us about in the comments section below. 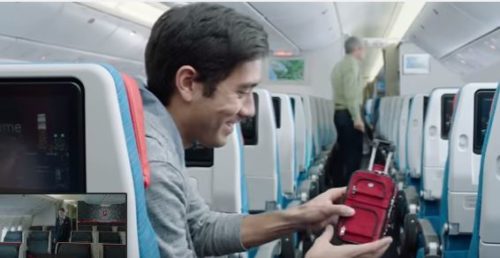 Some people say it is a bad idea to add a bit of levity to airline safety videos.

Here’s the latest version of the safety video from Turkish Airlines, which has enlisted fast-cut filmmaker and YouTube sensation Zach King to encourage you to watch the action very closely.