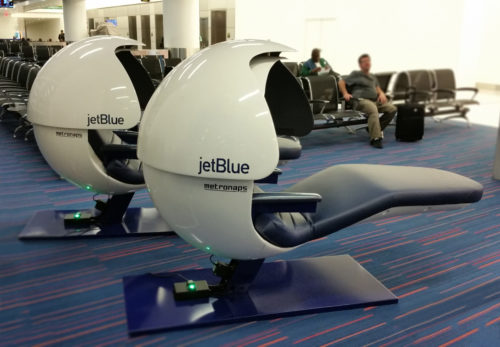 Airport amenity of the week?

MetroNaps says their pods offer “an ergonomically perfect, gravity-neutral position that optimizes circulation and encourages a reinvigorating, restful siesta” with visors for “serene seclusion” and soothing sounds piped in to block out noise.

There are even storage bins for tucking away carry-on bags and coats.

These are napping pods – not sleeping pods – so after the 20 complimentary minutes the pod will wake you up.

Not by shaking you and yelling “Hey, you – get outta’ here!” but by raising up out of a recline position and gently waking you with a combination of lights, music and vibration. If you want to relax or catch a nap at most airports you have few options beyond slumping uncomfortably in a chair or trying to find a spot in a less-trafficked part of a concourse and stretching out on the floor.

Some airports try to help.

Boston, Philadelphia and Charlotte Douglas International in North Carolina are among the growing number of airports with rocking chairs scattered throughout the terminals. And lounge-style chairs are provided at airports in Amsterdam, Paris and Singapore, and in Los Angeles’ Tom Bradley International Terminal, which opened Sept. 8.

The options expand if you’re willing to open your wallet for the privilege of closing your eyes.

At Amsterdam’s Schiphol and London’s Heathrow and Gatwick airports, you can book a small, short-stay room at a Yotel that includes a bed, flat-screen TV, full bathroom and Wi-Fi.

For about $40 travelers can catch an hour of zzzs in the Napcabs at Munich Airport or in the Snoozecubes at Dubai Airport.

At airports in Dallas/Fort Worth, Atlanta and Philadelphia, Minute Suites offers rooms with a daybed, TV, sound-masking system, desk and Wi-Fi at hourly rates that start at $34.

“Sixty-two percent of our guests are there to sleep, the remainder to relax or work,” said Daniel Solomon, co-founder and CEO of Minute Suites.

And in an effort to create a “calm and peaceful space for passengers to relax, rest and even sleep” Helsinki Airport in Finland will soon replace a gate waiting area with a hushed zone.

Scheduled to open by the end of September, the Relaxation Area will be free to passengers and offer a variety of resting and napping options, including a Uni-Solution chair, several versions of a Silence Sound chair and a sleeping tube just coming out of production.

The area is free to travelers, who will be polled as part of a study being conducted in cooperation with Aalto University School of Business. Questions will include which chair they like best, how such an area should be operated and how the services compare with membership lounges.

The pilot program is being run by a city-owned development company, Vantaa Innovation Institute, as part of its Airport Concepts project. Six Finnish companies are providing products for the pilot, which is costing about $63,000 and will include decorative elements that reflect the country’s culture.

“We hope to catch all kinds of passengers and offer a service for those who don’t use airport lounges,” said Ilmari Halme, development coordinator for Vantaa Innovation Institute.