Airports across the country will be marking Mother’s Day with complimentary flowers, music and more.

Today between 11 a.m. and 1 p.m. in the post-security Great Hall at Los Angeles International Airport, the Mother’s Day celebration will include a photo booth, complimentary wooden roses, and appearances by some of the pups from the Pets Unstressing Passengers (PUPs) program.

And, as they have for many years, this weekend volunteers at Florida’s Jacksonville International Airport will likely be handing out flowers to arriving moms and those waiting for their moms.

We’ll add more Mother’s Day activities as they roll in.

Starting May 13, Delta Air Lines is kicking off a much-welcome two-week pilot program to offer free in-flight Wi-Fi in all cabins on 55 short, media and long-haul flights.

The carrier says this is the first step towards offering complimentary Wi-Fi for everyone, all the time.

“Customers are accustomed to having access to free Wi-Fi during nearly every other aspect of their journey, and Delta believes it should be free when flying, too,” said Ekrem Dimbiloglu, Director of Onboard Product in a statement. “Testing will be key to getting this highly complex program right – this takes a lot more creativity, investment and planning to bring to life than a simple flip of a switch.”

Delta’s Wi-Fi for purchase and free mobile messaging will remain available throughout the test.

The two-for-one ticket offer is valid for travel nationwide between June 1 and September 30. Use discount code C250.

Bonus: if you’re an Amtrak Guest Rewards member (or sign up to be) you can also earn double points if you travel by May 18

Following the flowers: how they fly from the farm to you Mother’s Day weekend is being celebrated at airports around the country, starting today.

At Los Angeles International Airport, traveling mothers can get complimentary makeovers, hand massages and fragrance consultations, sample Godiva chocolates and enter raffles for prizes in front of DFS, post-security at the Tom Bradley Terminal (TBIT) on Friday from 11 a.m. to 1 p.m.

Airport staff will also be handing out chocolate roses to moms.

Friday through Sunday at Miami International Airport (from 10 a.m. to 1 p.m. pre-security and from 2:30 p.m. to 5:30 p.m. post-security) MIA Ambassadors will be presenting moms with chocolate roses.

Moms at MIA can also enter a raffle for a $200 American Express gift card if they take a picture with a chocolate rose or with an “I’m a Mom, what’s your super power?” t-shirt at an MIA concession and post it to a MIA social media platform with the “ShopsAtMIA” tag.

And, as they have every year since 2009, volunteers at Jacksonville International Airport will likely be on duty with 1000 red, white and pink carnations for moms. 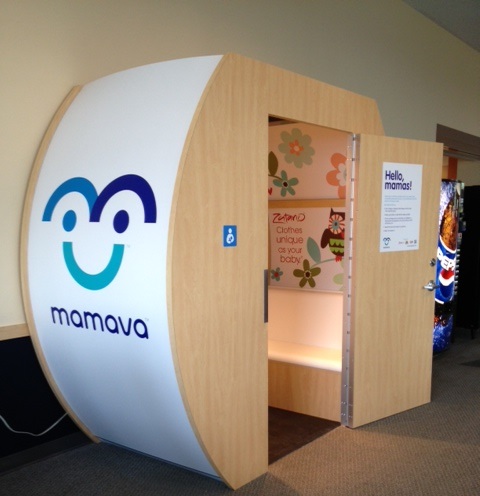 Nursing moms flying to or from JFK International Airport on JetBlue get a welcome new amenity on Wednesday with the unveiling of a Mamava lactation suite in T5.

JetBlue’s nursing station is being installed at JFK T5 just in time for Mother’s Day and right now is scheduled to stay there for just six months, but the airline is hoping to make it permanent.

Mother’s Day is being celebrated at other airports as well. Continuing a tradition, volunteer ambassadors at Florida’s Jacksonville International Airport will be handing out 1,000 carnations to passengers on Sunday, May 10.

And through May 10, passengers traveling through LaGuardia Airport’s Terminal B and Philadelphia International Airport can take advantage of a sparkly Free Gift with Purchase offer.

Spend $100 in one or more shops and (while supplies last…) you can redeem the receipts for a multi-strand crystal and pearl bracelet. There’s also a Twitter contest to give away five of those bracelets (valued at $45) at each airport.

Details on both offers here and here. And if you happen to be passing through Frankfurt International Airport on Mother’s Day, look for Elvis.

In addition to performances by a champion Elvis impersonator, there will be a rockabilly band, an acoustic trio singing Elvis songs and a exhibit of photos and souvenirs related to Elvis’s stint as a soldier.

There will also be a vintage car show in front of Terminal 1, contests and – for anyone who shows ups wearing an Elvis costume or a 1950s outfit, free entry to the airports’ observation deck, known as the Visitors’ Terrace.

As they do each year, the volunteer ambassadors at Jacksonville International Airport will be handing out carnations – 1000 of them – on Mother’s Day to moms passing through the airport. The JAX ambassadors do this on Valentine’s Day as well.