If you happen to be at San Francisco International Airport on August 20th, 2013, make your way over to the library at the Louis Turpen Aviation Museum in the International Terminal for Flight Attendant Celebration Day.

The event will run from 10 am until 3 pm and celebrate the history of flight attendants with talks, short subject films and commemorations, along with complimentary refreshments and free validated parking.

Here’s a link to the scheduled events of the day.

Even if you can’t be on hand for Flight Attendant Celebration Day on August 20th, be sure to stop by the museum to see the current exhibition United We Stand: Female Flight Attendant Uniforms of United Airlines, which will be there through the end of September 2013. For the first time since the 9/11 terror attacks, the Transportation Security Administration (TSA) will allow small knives and some previously prohibited sports equipment onto airplanes as carry-on items. 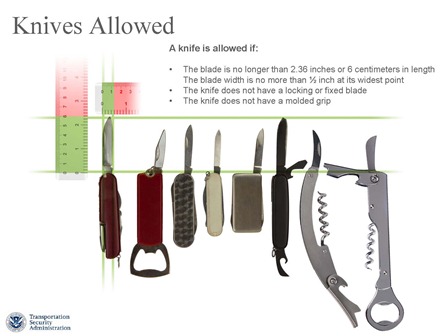 According to the TSA, passengers will be able to carry-on knives that are less than 2.36 inches long and less than one-half inch wide. Larger knives, and those with locking blades, will continue to be prohibited, as will razor blades and box cutters, guns, firearms, and the dozens of other things listed on the published list of prohibited items. TSA will also soon permit sports equipment such as billiard cues, ski poles, hockey sticks, lacrosse sticks up to two golf clubs to be carried onto airplanes. Souvenir, novelty and toy baseball bats — such as wiffle-ball bats — will also be allowed. TSA said the new regulations will allow its officers to better focus efforts on finding “higher threat items such as explosives,” and was made as part of the agency’s overall risk-based security approach.

But the Flight Attendants Union Coalition issued a statement saying they are unhappy with this move, calling it a “poor and shortsighted decision” by the TSA.

“As the last line of defense in the cabin and key aviation partners, we believe that these proposed changes will further endanger the lives of all Flight Attendants and the passengers we work so hard to keep safe and secure,” the statement said.

TSA believes the items it will now allow in airline cabins are “unlikely to result in catastrophic destruction of an aircraft,” and that policies already put in place — hardened cockpit doors, federal air marshals, crewmembers with self-defense training — reduce the likelihood of passengers breaching the cockpit.

“All TSA is doing is catching up with the rest of the world,” said Douglas R. Laird, president of aviation consulting firm Laird & Associates and former head of security for Northwest Airlines. After 9/11 the TSA “overreacted,” said Laird, and put restrictions in place “in the heat of the moment” that exceeded those in other countries.

Removing small knives and some sports equipment from the list prohibited items “will help align TSA’s list with international standards and help decrease the time spent rescreening or searching bags for these once prohibited items,” said TSA spokesperson Nico Melendez. The changes also enable officers to focus on “the greatest threats … which increase security for passengers and improves efficiency, improving the checkpoint screening experience.”

(A slightly different version of my story about the TSA’s decision to take small knives and sports equipment off the prohibited items list is on NBC News.com.) Has anything unusual or humorous happened to Finnair flight attendants?

Looks like we’ll have to get a copy of Airborne: Tales From A Thousand And One Flights, to find out.

The book is billed as “a collection of true stories written by customer service professionals of the sky” and appears to be filled with stories like this:

A passenger was upset on a leisure flight as he had asked for a window seat, but had been given one on the aisle instead. The flight was full, and nobody in his immediate vicinity was willing to change seats. I wondered what I could do to cheer him up, and decided to make him a window. I took a trash frame and taped “curtains” from kitchen roll on it. I went up to the man and said, “I’m really sorry that our service chain has let you down today. However, to make up for your loss, I do have this portable window for you. Would you like me to hold it in place, while you eat your preordered vegetarian meal?” The passenger burst out laughing, and stayed in a good mood for the rest of the flight.

Tee-hee. There are more wild and wacky stories like that in the book, which is available in English or Finnish. Proceeds of the book will be donated to the Finnish Central Association for Mental Health, which works for the prevention of mental health issues among children and adolescents.