The ‘Miami Hound Machine’ – a team of therapy dogs – is coming to Miami International Airport. The team’s five volunteer K-9 Ambassadors – Abbey, Belle, Dash, Donovan and Pico – and their owners will be on site today with airport officials for a press conference. The pups will then go to work inside Concourse D, visting with passengers and being cute.

Members of the Miami Hound Machine are all certified therapy dogs from the Alliance of Therapy Dogs and will be on duty in the MIA terminals during peak travel periods. Have you encountered a member of an animal therapy team at an airport? Thumbs up or down?

Now there’s a pig on duty at SFO Airport 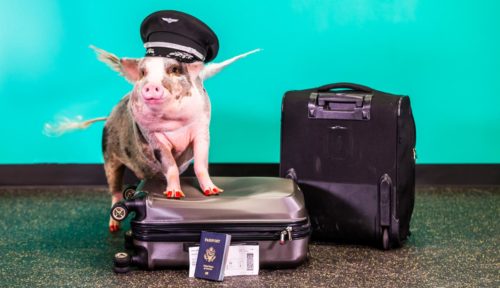 An increasing number of airports now have teams of therapy dogs on duty in the terminals to help ease the stress of travel.

Back in May, Cincinnati/Northern Kentucky International Airport added a miniature therapy horse to the mix. 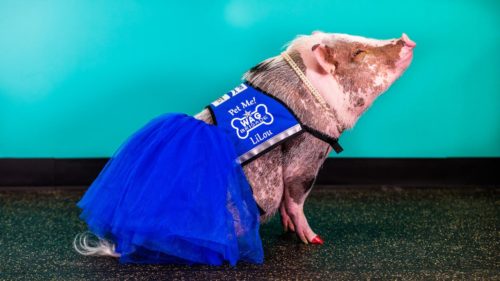 LiLou is the first pig to be certified in the SF SPCA’s Animal Assisted Therapy (AAT) program and was a perfect fit for SFO, which was determined to expand the type of animals in the Wag Brigade.

LiLou is sure to be quite the hit. In addition to be being a pig at the airport – she does tricks.

According to the stat-card Wag Brigade handlers will be distributing for LiLou in the airport, she can wave, greet you with her snout, play the piano and give a bow after her performance. She will also be twirling and standing up on her back hooves to entertain travelers. 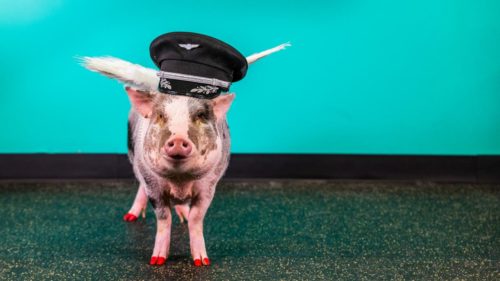 SFO’s Wag Brigade team has at least one dog on duty every day of the week, with up to 3 dogs at a time working their 2-hour shifts.  LiLou doesn’t have a regulars slot in the schedule just yet, but airport officials say the Juliana Pig will be on site at least once a month.

Dogs, miniature horse, a pig. Which animal do you think will show up next in an airport pet therapy program?

(All photos courtesy of SFO Airport)