Share the love at U.S. airports: get chocolate, win a prize Keep an eye out at airports this Valentine’s Day season for giant 8-foot chalkboards where you can add your message about the meaning of love – and maybe win a prize of a getaway for two valued at $1,000.

HMSHost, which operates restaurants in dozens of airports across the country, is bringing these chalkboards to about a dozen airports and will select one traveler and their story as the prizewinner.  (See contest rules and details here.)

Live music events will accompany the chalkboards in many of the airports and everyone who takes the time to add a message will receive a dark chocolate bar, a Valentine’s Day card and a coupon for a 15 perecent discount at HMSHost dining locations (while supplies last).

Chocolate? Who wouldn’t love that? Treats from airports and airlines for Valentine’s Day Air travel is usually more stressful than romantic, but on Valentine’s Day many airports and airlines go out of their way to add a little love – or at least some chocolate – to the journey. Today, Delta Air Lines customers flying in the main cabin on select flights between JFK and SFO/LAX will receive mini bottles of La Marca Prosecco, along with a striped straw and two Vosges Haut-Chocolat chocolate truffles. Passengers in the business class cabins will get Prosecco and four pieces of Vosges chocolate. Valentine’s Day is one of several days during the year when passengers on Southwest Airlines are treated to a complimentary alcoholic beverage. Employees of Southwest (which uses the stock ticker symbol LUV) will also be decorating gate areas and, at Phoenix Sky Harbor International Airport, welcoming representatives from the Phoenix Suns basketball team, who will marshal in an aircraft, hand out valentines and take boarding passes. Austin Bergstrom International Airport will be handing out complimentary chocolates to travelers and inviting passengers to snap a photo at a special selfie-station with an airport-themed replica of the city’s “I Love You So Much” mural, while entertainment, free candy giveaways and a ‘love wall’ for travelers’ messages welcome travelers today at Hartsfield-Jackson Atlanta International Airport. 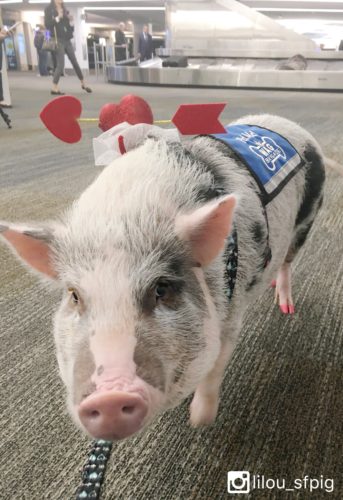 This past weekend, passengers at San Francisco International Airport had a chance to see the Wag Brigade’s therapy pig, LiLou, in her Cupid costume and today the miniature therapy horses that occasionally visit Cincinnati/Norther Kentucky International Airport will stop by CVG in their Valentine’s Day costumes as well. Of course, at airports nationwide today men and women will be on hunt for roses and other flowers to take home to the sweethearts.

Many of the bouquets they’ll find for sale will be filled with flowers that arrived just days ago from Ecuador and Columbia and transported by LATAM Cargo, which said that in advance of Valentine’s Day this year it shipped more than 9,000 tons of flowers.

That’s the equivalent, said LATAM, of 16 million bouquets or 200 million flowers and enough for all 160 million women in the United States to receive at least one flower.

Valentine’s Day at the airport – part 2 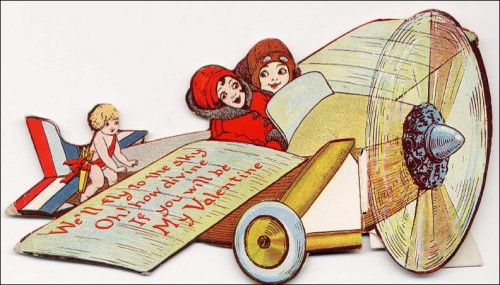 Valentine’s Day is not till tomorrow, but airports and airlines are celebrating already.

And this video put together with comments HMSHost collected at love walls it put in several airports. Chocolates, of course, and pink-tinted macarons are not that expensive and are easy to carry.

And then there are selfie-spots around the airport right now offering a fun way to make a free Valentine. If you’re lucky enough to be in the airport on February 14 between 8 am and 3 pm, keep an eye out for hostesses who will fanning out in the terminals offering fortune cookies that will filled with messages of love.

Two of those cookies will have something extra: a prize of a weekend in Paris. (Details here... in French.)