BWI gets a post-security fitness center Need a real work-out before you fly?

A post-security fitness facility, called ROAM Fitness, is scheduled to open at Baltimore/Washington International Airport on Monday, in the new connector between Concourses D and E.

The space will be open daily from 5 a.m. to 10 p.m. and will have cardio equipment, stretching space, free weights, kettle bells, medicine balls, stability balls, a TRX system, yoga mats and a pull-up bar.

There’s also a shower reservation system to make sure everyone can freshen up before their flight.

Access to ROAM Fitness at BWI is currently $40 for a day pass, $175 for a monthly pass and $600 for a yearly pass. Passes can be purchased online, on a smartphone or at the door. (Check the website for deals on discounted passes.)

Not a regular at BWI? The next ROAM Fitness center scheduled to open in 2017 is slated for Charlotte Douglas International Airport.

For $20 ($22.40 with tax), travelers can get a day pass to use the pool and extensive fitness facilities at the Hilton Chicago O’Hare Airport, which is accessible from O’Hare via underground walkways.

And there’s also a branch of GoodLife Fitness on the arrivals level of Terminal 1 at Toronto Pearson International Airport ($14 CAD/about $11 US for a 14-day trial membership.) 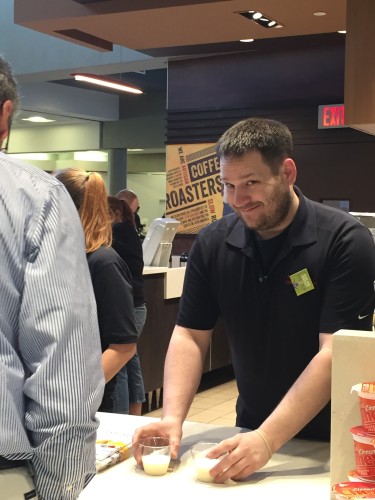 It’s Fit2Fly week at airiports in Boston, Baltimore, Pittsburgh and Cleveland and that means free healthy snacks, complimentary massages and giveaways that include Fitbit wireless activity-tracking wristbands and travel yoga mats through May 2.

Coordinated by AIRMALL USA, which operates shops and restaurants at the participating airports, Fit2Fly Week also features free health and wellness services and handouts with tips on staying healthy while traveling.

Activities vary by airport and day.

At Boston Logan’s Terminal B, the schedule includes free yoga lessons on Wednesday, free 5-minute massages on Thursday and healthy snack tastings at the Berkshire Farms Market on Friday.

At BWI there will be free yoga classes on Wednesday, with giveaways of yoga mats, water bottles and jump ropes and a free “healthy choices” tasting event at the Silver Diner from 11 a.m. to 2 p.m. On Friday, there will be a 1K airport Fun Walk with a drawing for a Fitbit.

At Pittsburgh International Airport you’ll find free yoga lessons and giveaways on Wednesday, complimentary foot massages at the Massage Bar on Concourse A on Thursday and – kale alert – on Friday, there will be a sampling event for Pinkberry’s kale and strawberry smoothies.

At Cleveland Hopkins International Airport there will be free 3- to 5-minute chair massages on Thursday and, on Friday, free tea tasting and complimentary healthy snacks.

Airports want you to take a hike Travel slug? Get a workout at the airport

It’s far too easy to become a slug when you’re on the road. But staying active offers business travelers an edge: the benefits of working out while traveling include stress reduction and an increased ability to combat jet lag. GoodLife Fitness, which has over 300 locations across Canada, has opened a branch in the Terminal 1 Arrivals area (presecurity), offering a 10,000-square-foot workout area, changing rooms with showers, towel service and luggage storage. No workout clothing? No excuse: Workout clothing and sneakers are available for rent. A daily pass is CND $15, or US $14.58. Hours: 4:30 a.m. to 11:30 p.m.

Toronto Pearson may currently be the only airport in North America to have an in-terminal fitness club open to the public, but it’s not the first to give it a try. In the late 1990s, North America’s first airport fitness center opened at Pittsburgh International Airport (it closed not long after 9/11), and for several years there was a 24-hour fitness club at McCarran International Airport in Las Vegas.

While certainly convenient, on-site fitness clubs aren’t the only way to get a workout at the airport. Here are some options for working off calories in other North American airports. Accessible from the domestic terminals and popular with pilots and flight attendants as well as travelers, the 8,000-square-foot fitness center at the Hilton Chicago O’Hare Airport has an indoor lap pool, sauna, steam room and full-service locker room. Work-out gear is available for purchase. Daily pass: $20; hours: 5 a.m. to 10 p.m. weekdays, 6 a.m. to 10 p.m. weekends. The Westin Detroit Metropolitan Airport, connected to the airport’s McNamara Terminal, offers guest passes to the fitness club, a pool and locker room for $15. Open 24 hours (pool closes at 11 p.m.) The 12.5 mile scenic BWI Trail completely encircles Baltimore-Washington International Airport and has a walking /biking path that includes a link to an aircraft observation park with picnic tables and a playground. “BWI has a longstanding reputation as the ‘Easy Come, Easy Go’ airport,” said airport spokesman Jonathan Dean. “The BWI trail resources are an important example of our commitment to a convenient, excellent experience for our customers.” The Grand Hyatt DFW, connected to the international terminal at Dallas/Fort Worth International Airport, offers day passes to its fitness center and to the heated outdoor pool on the rooftop overlooking a runway, for $30. Locker room facilities include steam saunas; nonguests may use the facilities until 8 p.m. At Vancouver International Airport, travelers may purchase a day pass to the health club at the Fairmont Vancouver Airport for CND $18 (US $17.50). Club features include a children’s wading pool, a mechanized three-lane lap pool that allows swimmers to adjust their own current, saunas and work-out equipment. Hours: daily 6:30 a.m. to 11 p.m.

Of course, even if there are no marked walking paths, health clubs or yoga studios at an airport, there’s still an easy—and free—way to work off calories: Take the stairs instead of the escalators, avoid the moving walkways and track your mileage with a clip-on pedometer or an app on your smartphone. Just try to set your path to avoid the airport candy shops—and the bars.