Denver Airport turns 24 – and gets chatty about it

Lots of odd conspiracy theories swirl around the art and some of the architectural elements at Denver International Airport.

And the airport is OK with that.

To mark its 24th birthday, the airport is sharing this video of one of the gargoyles that came alive.

Have a theory – or a question – about something you’ve seen or heard about Denver International Airport? Share it in the comments section and we’ll track it down.

Like zombies, the conspiracy theories about everything from aliens to underground bunkers, lizard people and secret military installations at Denver International Airport never die.

DEN officials do their best to debunk the really bizarre claims, but they have fun with them as well.

This month, to coincide with the Halloween season, the airport is even hosting a series of conspiracy theory-themed events, including a “Conspiracy Theories Uncovered” Art Exhibit (near the north security checkpoint; open 24 hours) with video, artwork, props and more that explain the most pervasive theories, free hour-long conspiracy theory art tours (Tuesday, Thursdays and Saturdays through October 29), a “What’s Under DEN” Facebook contest and a Conspiracy Costume Party – on October 20 – with a free screening of Close Encounters of the Third Kind out on the plaza between the airport terminal and the Westin Denver International Airport. 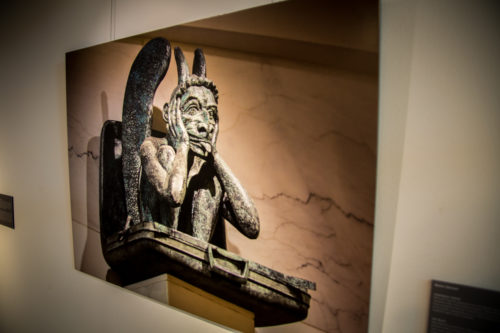 This edited guest post is by Robert Little, a high school senior in Boston, Mass. interested in all aspects of aviation, especially airports. Which makes him an ideal summer intern for the StuckatTheAirport.com blog. In addition to this report, Robert has already cleaned up a contact database for airports and airlines. And it’s just the beginning of summer!

At airports, art can do all that – and more – although passengers often miss the carefully placed permanent installations and temporary exhibitions as they wait in long lines, rush to make a tight connection or hurry to get home after landing.

Staff tasked with enriching the passenger experience from large airports such as Miami, Denver, Dallas, or Houston, and smaller ones like Aspen, Colorado and Burlington, Vermont gathered recently in Minneapolis for the 14th Annual Arts in the Airport Conference hosted by the AAAE and Arts at MSP.

Conference attendees were treated to a tour of the art spaces managed by the Airport Foundation at Minneapolis-St Paul International, the host airport.

MSP has two main art spaces: a screening room and a gallery for rotating exhibits. The screening room, able to seat about fifty comfortably, makes great use of previously unused space and presents documentaries on a running loop from artists in the Minnesota area.

Glass display cases along a long stretch of hallway in Terminal 1 offer temporary exhibitions highlighting current events and local culture. The current program is The Art of Food, an exhibit that extols the agriculture brands of Minnesota. “The Art of Food” exhibit at MSP Airport. In the Thomson Reuters Concourse C Art Gallery near Gate C12. Photo by Robert Little.

With new terminal renovations, MSP’s Airport Foundation plans to add new artists and collections in more spaces and engage the traveling community in the screening room with a space where passengers can record and share travel stories.

Denver International Airport is also engaged with its community in an ongoing conversation about art and conspiracy theories. Children of the World Dream of Peace – by Leo Tanguma. Courtesy of Denver International Airport

Since the inauguration of the airport 21 years ago, various conspiracy theories have been floated about the abandoned baggage system, murals by Leo Tanguma and something called the “New World Airport Commission,” which conspiracy theorists believe closely relates to the popular idea of a New World Order forming and Denver Airports’ Jennifer Garner said is merely a coincidence, as the commission was meant for the “New” airport that was planned for construction. A fresh new conspiracy theory has popped up concerning one of the six new art pieces installed around the new hotel next to the airport. Some conspiracy theorists believe that “Field of Air,” by Ned Kahn, which features thousands of aluminum blades that blow in the wind and reflect shadows, represents weapons or a place where they are hidden.

As with the other artwork in DEN’s collection, this conspiracy theory has also been debunked by the airport. The art program at Miami International Airport is also actively engaged with the community and encourages passengers to snap and share pictures on social media of installations such as “Meltdown,” by Jen Stark in the North Terminal and “Harmonic Convergence,” by Christopher Janney, near the MIA Mover on the way to the Rental Car Center. And at both Dallas Love Field and Dallas-Fort Worth International Airport even non-travelers can book a tour online and join experienced guides on an art tour through pre and post-security sections of the airports.

Be sure to look for curated art exhibits airports offer both before and after security. They can offer a relaxing break in the hustle and bustle of the airport.