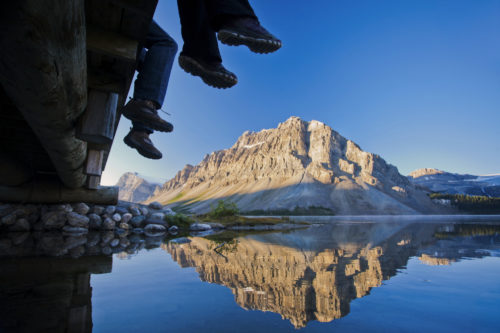 If flying over Niagara Falls in a helicopter or coming face to face with a polar bear in Manitoba are experiences on your bucket list but not in your budget, now may be the time to recalculate.

The Canadian dollar – known as the Loonie – dropped 16 percent against the dollar last year and is now hovering at about 70 cents to the U.S. dollar.

That means that U.S. travelers heading north of the border for the Valentine’s Day/Presidents’ Day weekend or perhaps the NBA All Star Game (Feb 12-14) in Toronto will find everything from dining, shopping and lodging to attraction admissions on sale at 30 percent off.

“At Blackcomb-Whistler, Revelstoke and Banff, 3-star hotel rooms for Presidents’ Weekend can be booked for under $50 U.S. per night, which frees up money for lift tickets and meals,” said Priceline.com’s Brian Ek.

“Multi-day Banff lift tickets cost less than Tahoe at par, and you’ll save even more with the exchange rate,” said Arabella Bowen, Editor-in-Chief at Fodor’s Travel.

Long before winter set in, savvy travelers were already taking advantage of the deals offered by the devalued Canadian dollar.

“In 2015 we saw an 8 percent increase over 2014 in inbound travel from the United States,” said Rob Taylor, Vice President, Public & Industry Affairs, for the Tourism Industry Association of Canada.

According to group’s Summer Travel Snapshot, during the 2015 summer season alone (May to September) Americans added $1.9 billion to the Canadian economy.

“2015 was the best year we’ve had since 2008, when Canada saw a big dip in U.S. tourism because the United States began requiring Americans to show a passport to reenter the country,” said Wayne Thomson, chair of Niagara Falls Tourism. “More Americans have passports now and I’ve talked to people staying at some of the hotels who are amazed at the bargains they’re getting.”

The story is much the same across Canada.

In 2015, Tourism Vancouver recorded 8.7 percent growth in US visitation to the city over the same period in 2014, said Amber Sessions, Communications Manager for Tourism Vancouver, and “many hotels and tourist attractions here are taking advantage of the low Canadian dollar to reach out to U.S. travelers with special offers and targeted advertising.”

As of November, 2015 visits from United States to Ontario were up 9 percent over 2014. In November alone there was a 14 percent increase in visitors over November 2014.

And because it’s now more costly for Canadians to travel outside of the country, “more Canadians are traveling domestically,” said Andrew Weir, Tourism Toronto’s Executive Vice President and Chief Marketing Officer, “so it’s a win-win for cities like ours.”

Even Churchill (population: 813), the tiny town in the far north of Manitoba famous for polar bear and beluga whale viewing experiences, is seeing increased visitors.

The trips range between US $6,000 and US $7,500 for a 5-day excursion that includes airfare from Winnipeg to Churchill. “But in Canadian dollars that’s almost free,” said Ferguson.

Being able to go on a bucket-list adventure at a huge discount is a big draw for some visitors heading to Canada right now. For others, it’s the increased value they get for their vacation dollars.

“The dip in the Canadian dollar means a $500 room at a resort in Whistler is really just US $350. And compared to a $500 room in the U.S, it’s just a way better value. And it extends to shopping, restaurants, activities and so on,” said David Lowy, President of Renshaw Travel, a Virtuoso-accredited travel agency in Vancouver.

“We’ve had a 17.8 percent growth in Whistler as a destination this year,” said Jack Ezon, President of Virtuoso member Ovation Vacations in New York,” with some clients heading to Canada instead of Vail, Colorado or Deer Valley, Utah.

“In some cases the airfare to Vancouver is less expensive,” said Ezon, “and I can get them a two or three room residence at the Four Seasons Whistler for the same price as two connecting rooms in Vail.”

South of the Canadian/US border, some businesses and cities have seen a drop-off in Canadian visitors due to the loonie’s decline.

“Canadian visitors used to be our some of our best weekend customers,” said Sarah Young, owner of the SaySay Boutique in Portland, Oregon, “especially when we reminded them there is no sales tax in this state. But now, if they’re even in town, they’re carefully checking the exchange rate and buying fewer items.”

But Seattle, for one, isn’t giving up.

Last week it issued a round-up of hotel packages with special perks and promotions only available to Canadian visitors, including a NW Resident Rate at the four Kimpton properties in town and, at the Renaissance Seattle Hotel, a Weekend Rate Parity package that includes free self-parking breakfast for two and a rate that is the same whether paying in U.S. or Canadian dollars.

(My story about travelers heading to Canada lured by the dip on the Loonie first appeared on CNBC.com.) With the Canadian dollar currently worth just 69 US cents, now is a good time to take that vacation up north.

One of my favorite Canadian cities is Victoria, B.C., which is just a one-hour float plane ride or a 3 hour high-speed passenger ferry ride from my home base of Seattle.

And my favorite place to visit in Victoria is the Royal B. C. Museum, which is filled with world-class exhibitions and permanent galleries – and which has lots of treasures tucked away in the vaults.

There’s an admission charge to enter the museum (well worth it), but there’s a new gallery – the Pocket Gallery – that is free for everyone and filled with objects from the collection that are rarely or never put on view.

The first Pocket Gallery exhibition, Finding Fishes, features beautifully crafted replica fish and preserved fish collected from the BC coast and among the specimens on display is the Bony-eared Assfish, the first of its kind found anywhere in BC.