It’s time to get a flu shot and being on the road all the time isn’t an excuse anymore for avoiding that task.

Especially since, as I wrote in my column on USATODAY.com this week, there are more than 23 airports where you can get a flu shot on the fly. Here’s the story:
Robert Gibbs stays busy running his marketing agency and says finding time to nail down a doctor’s appointment is getting harder and harder.

So on Monday, when he arrived from Chicago and saw that the Harmony Pharmacy store at New York’s JFK airport was offering flu shots, he took off his heavy tweed jacket and rolled up his shirt sleeve. “I’d shopped there before and just thought ‘Now is as good a time as any.’ I didn’t feel weird at all,” said Gibbs, “In fact, getting a flu shot while running through the airport seemed pretty cool.”

First marketed to travelers by the medical clinic at Chicago’s O’Hare International Airport seven or eight years ago, in-airport flu shots are being offered this year at clinics and temporary kiosks at close to two dozen airports stretching from Los Angeles to Miami.

“Flu costs Americans an estimated $3 billion or more each year in medical fees and indirect costs such as missed work,” said Jeff Hamiel, executive director of the Metropolitan Airports Commission, in announcing the three vaccination stations now open at Minneapolis-St. Paul International Airport. “Making vaccinations available at the airport ensures that even the busiest travelers can take steps to stay healthy and productive.”

The CDC and Dr. Z agree

The 2010-2011 flu season began in early October and, according to the Atlanta-based Centers for Disease Control and Prevention (CDC), the season will probably peak in January or February and possibly stretch into the spring. CDC recommends everyone 6 months or older get vaccinated and, unlike last year, says it’s not necessary to get a separate shot to protect against the seasonal flu and the H1N1 virus. “The 2010-2011 flu vaccine will protect against an influenza A H3N2 virus, an influenza B virus and the 2009 H1N1 virus that caused so much illness last season.”

At Chicago O’Hare, flu shots have been available at the airport medical clinic since August and at a stand-alone kiosk since Labor Day. “We don’t know what the flu season will be like this year yet,” says Dr. John Zautcke, Medical Director of the UIC-O’Hare Medical Clinic, “But the flu is a nasty disease that kills people who are old and sick and puts people that are young and healthy in bed for 4-6 days.”

Zautcke says that in addition to frequent hand washing, covering your nose and mouth when sneezing and trying to avoid close contact with sick people – which can be hard to do on an airplane – “The best thing travelers can do to avoid the flu is get a flu shot.”

Plenty of vaccines but fewer patients

Starting in November last year, there was a nationwide shortage of the seasonal flu vaccine because pharmaceutical companies switched to making vaccines for the H1N1 virus. This year, the vaccines are combined and there’s no shortage. But Jeff Butler of Flu*Ease, the company operating flu shot kiosks at more than a half-dozen airports, says airport flu shots don’t seem to be selling as robustly as they have in past years. “I don’t know whether it’s the mild weather, last year’s frenzy over H1N1 or the fact that people now have access to flu shots in so many stores and corporate offices,” says Butler.

“We’re finding the same thing,” says Rosemary Kelly, executive vice president of AeroClinic, which is offering flu shots this year at airports in Atlanta, Philadelphia, Charlotte, Baltimore and Minneapolis-St. Paul. “It just doesn’t seem to be as hot of a topic this year as it was last year.”

That isn’t stopping some airports from expanding their flu shot offerings. This year, San Diego International Airport has five vaccination stations in operation throughout the terminals. Four stations are located post-security, but one station is in a baggage claim area to make it easy for meeters and greeters, and passengers picking up checked bags, to get vaccinated while they wait. And at New York’s JFK Airport, Harmony Pharmacy is waiting for the final OK to open a second flu-shot station; this one in the center of JetBlue’s Terminal 5, by the performance stage.

And the fact that the flu isn’t in the news right now didn’t deter Diane Callen from getting her flu shot at the airport. Callen, a customer service agent at the Las Vegas airport, was robbed over the weekend. “Let’s just say I don’t need to worry about my jewelry anymore,” she said on Monday. After visiting the police station to fill out paperwork, Callen stopped at the Airport MD booth at McCarran International Airport before reporting for work. “It’s one of those things I usually don’t do unless it’s convenient and I figured the way things are going for me, I’d better go get that flu shot.”

To see which airports are offering flu shots – at clinics or at temporary kiosks – scroll down to the bottom of the article: Get your flu shot on the fly at an airport near you. 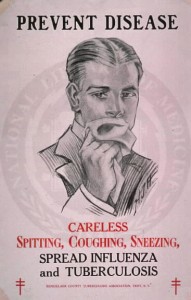