Thanks to ThisDayin History.com for the reminder that on this day, February 7, back in 1964, Pan Am Yankee Clipper flight 101 from London Heathrow landed at New York’s John F. Kennedy International Airport with its special cargo of Beatles. 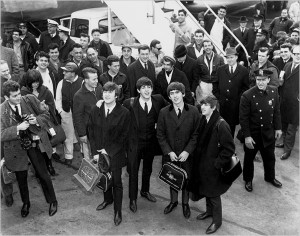 It was the first visit to the United States by the Beatles, a British rock-and-roll quartet that had just scored its first No. 1 U.S. hit six days before with “I Want to Hold Your Hand.” At Kennedy, the “Fab Four”–dressed in mod suits and sporting their trademark pudding bowl haircuts–were greeted by 3,000 screaming fans who caused a near riot when the boys stepped off their plane and onto American soil.

Here’s a great video using clips from that day:

Two days after their arrival at JFK, the Beatles made their first appearance on the Ed Sullivan Show.

One thought on “The Beatles and JFK Airport”