Stuck at the Airport has been in Houston this week taking part in the citywide celebrations for the 50th anniversary of the Apollo 11 Moon landing and the first time humans walked on the Moon.

While here, we visited Space Center Houston, the science and space exploration center where the public gets a chance to see (and touch!) Moon rocks and learn first hand about what it takes to go into – and come back from – space.

There’s also a great gift shop. And for Souvenir Sunday, we’re sharing some of the fun gifts we’re taking home.

Thanks for joining us this week while we celebrated the anniversary of the Apollo 11 Lunar Mission.

Houston celebrates the 50th anniversary of the Apollo 11 Moon Landing

Stuck at the Airport is in Houston this week, joining in the celebrations and events to honor the 50th anniversary of the Apollo 11 lunar expedition.

Here are some snaps from a special United Airlines flight to Houston on July 17 and some fun stuff from on the ground. Stay tuned for pics and stories throughout the week.

Straight to the Moon – well, Houston.

This week pretty much everyone is celebrating and commemorating the 50th anniversary of Apollo 11 launch and the first manned mission to land on the Moon.

Why fly to Houston now?

Houston is also known as “Space City”  because it is home to NASA’s Mission Control Center at the Lyndon B. Johnson Space Center.

StuckatTheAirport.com is going along on Flight 355. We’re promised space-themed entertainment, inflight gifts (yay!) and “special onboard guests who have first-hand experience in space.”

We think that means astronauts will on board…

Once we land in Houston, we’ll join Space Center Houston’s Apollo Anniversary Celebration and get to tour the Apollo Mission Control Center, among other activities.

We’ll also try to taste some of the special cocktails and menu items being served this month at two OTG restaurants at IAH that were inspired by meals the astronauts ate during the Apollo 11 mission.

The astronauts were served “meals” that look like this:

But the special “Eat Like an Astronaut” dishes on the menu at Ember Tavern and Tanglewood Grille in United Airlines’ Terminal C and E at IAH look far more appetizing: 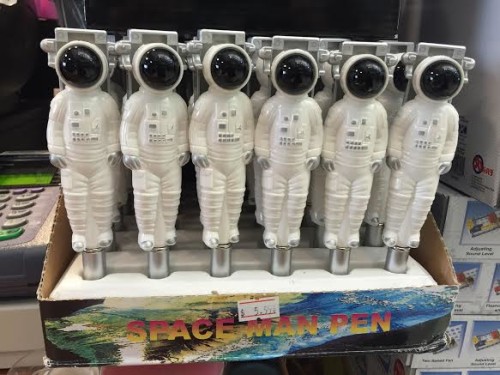