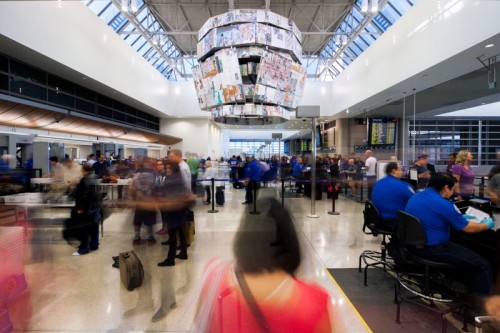 Bell Tower, above, by Mark Bradford, is on the mezzanine level of the terminal’s Departures Hall, and is suspended from a skylight above the TSA security screening area.

The artist says he modeled the sculpture – 712 panels made from salvaged plywood and posters found on construction sites around town – on medieval bell towers, which served as both a civic gathering spot and sites of surveillance. 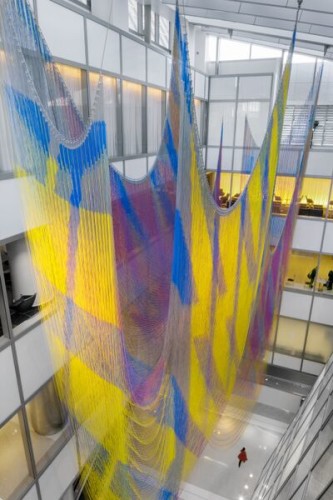 In the north light well of the TBIT Great Hall, look for Air Garden, by the Ball-Nogues Studio. A “sinuous, dynamic cloud of color,” the sculpture looks like a giant beaded curtain that seems to take on different shapes depending on the light and viewer’s perspective. 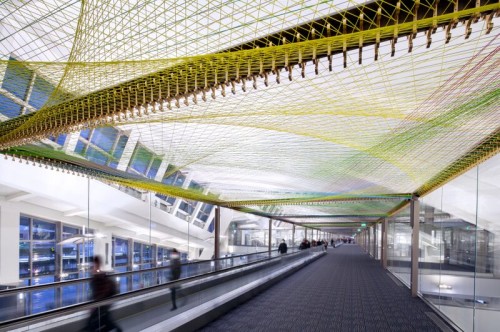 The third public art piece is Pae White’s, ΣLAX, which is suspended above the terminal’s north and south “sterile corridors” leading international passengers to customs.

The work is made of 23.86 miles of custom-dyed cordage in three distinct color palettes that pay homage to the colored-tiled mosaics by Charles D. Kratka, that are in Terminals 3, 4, and 6. Among the sculpture’s 7,484 gold brackets – are eleven (have fun guessing) that are actually made of 14K gold. 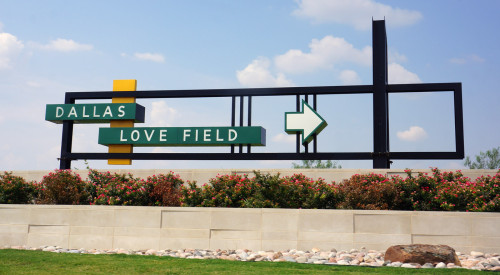 There’s been lots of news about new air service coming to Dallas Love Field, but the airport art program is also getting revved up. Nine new commissions have been added to the five already installed and there more are on the way. This mosaic mural greeting passengers in the main lobby – North Texas Sunrise, by Dixie Friend Gay – is 60 feet long and 18 feet high and depicts a Dallas sunrise breaking over a field of Texas wildflowers. Sky, by Brower Hatcher, is made of intertwined light weight fiberglass rods and includes 3000 flying objects ranging from modern airplanes and biplanes to birds, bees and clouds, with small LED chip lights that create atmospheric effects. And In Flight, by Paul Marioni, is a terrazzo floor that features birds flying over a changing skyscape. Take a look here to find out more about the program.

Rent a car; see great art at the airport

It was the first airport where I spent a night sleeping on the floor, and I’ve spent many an official and unofficial hour poking around its nooks and crannies.

But I haven’t taken the time to jump on the shuttle bus and go out to the consolidated rental car center facility, which opened in 2012.

Look what I was missing:

Linda Beaumont’s “Spinning Our Wheels,” is made up of 91 six-foot tall very colorful steel discs. And then, there’s Buster Simpson’s “Carbon Veil,” which is made up of two helices covered with a stainless steel mesh fabric.

Fresh art – you can sit on – at Anchorage International Airport Now Baron has a set of six new bronze sculptures in Terminal B at the Ted Stevens Anchorage International Airport that include objects he collected during a trip to Alaska. Like the sculptures at the Indianapolis Airport, the art doubles as seating. As part of its $4.11 billion facelift, Los Angeles International Airport has finished See Change, a giant public art installation in the newly renovated Tom Bradley International Terminal that includes 17 site-specific media artworks – by 17 different artists – displayed on a 58-screen, a 90-foot linear video filmstrip suspended from the ceiling and a media wall with 25 video monitors.

The artwork ranges from a video collage on the media wall to images moving across the filmstrip, including Ryan Lamb’s “Five-Dimensional Parade,” in which 8mm footage of the 1960 Rose Bowl Parade appears as a distorted and Chip Lord’s work “To & From LAX,” which combines footage and still images from airports around the world, organized to represent actual flight patterns in and out of LAX.