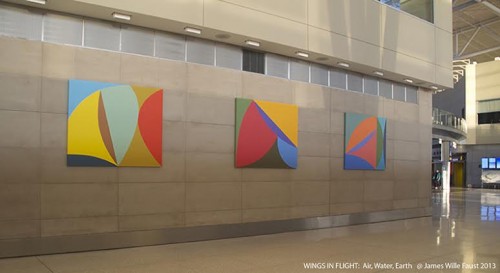 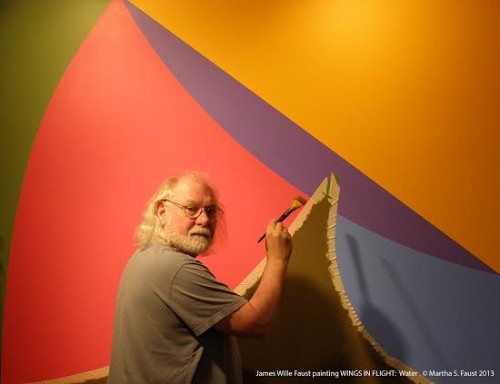 The work is made up of three paintings – Air, Water, and Earth – and can be found pre-security, at the entrance to the airport’s Civic Plaza.

Visitors to IND airport may recognize Faust’s style: one of his previous installations – Chrysalis – was a site-specific work that was removed from the terminal in 2011 to make way for a video wall that displays advertising, public messages and video art. You can read about that episode here. 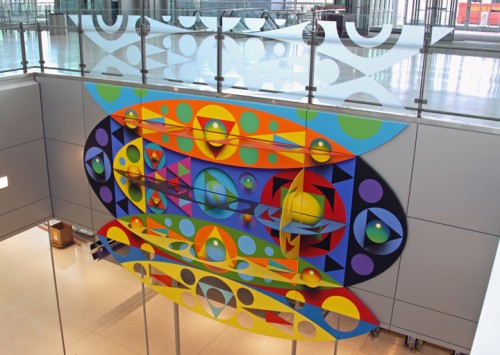 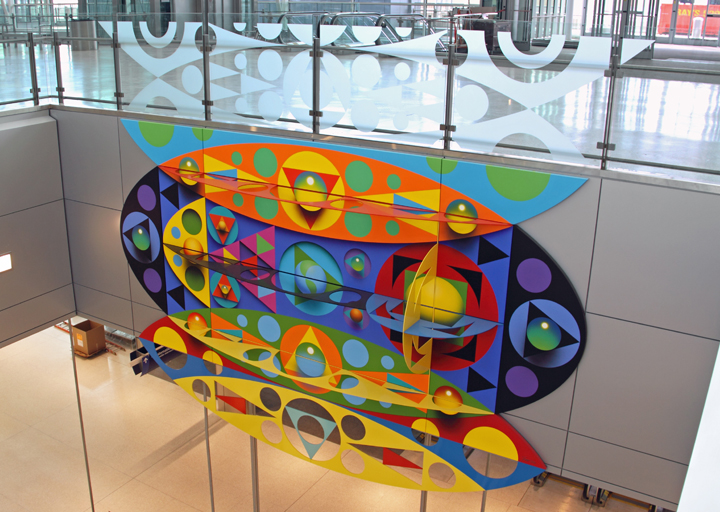 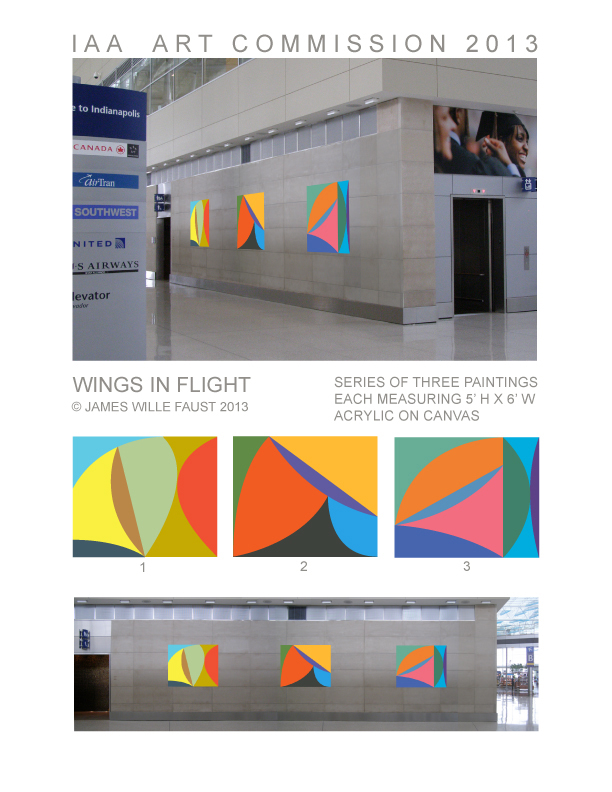 To the dismay of the mayor of Indianapolis, many local citizens, much of the arts community in Indiana and beyond and, most of all, artist James Wille Faust, on Monday night workers removed Faust’s site-specific work, Chrysalis, from its prominent spot over the main escalators at Indianapolis International Airport.

Chrysalis had been made for and installed in the airport’s new passenger terminal back in 2008, as part of the $4 million collection of permanent public art work that had been commissioned for the building from 17 artists and six poets.

But at IND airport, “permanent” doesn’t seem to mean what we thought. Faust’s work is to be replaced by what the airport calls an “innovative LED video wall … that will feature video-based artworks and commercial advertising.”

The video wall, to be installed in time for holiday travel, will be 22 feet wide and 7.5 feet tall and, in addition to advertising, will feature a video art series put together by curators from the Indianapolis Museum of Art.

According to a release from the airport, in its first year, the On Screen art program will feature Perm Press: The American Cycle (2011), a video by Indianapolis-based artist Artur Silva that runs about a minute and includes images of Abraham Lincoln and other American icons. A project by New York-based Nina Katchadourian called Seat Assignment (2011) will follow.

In a statement, airport authority CEO John Clark said the removal of Chrysalis and the installment of the video wall was a decision made in part “to remain competitive and support our goal of being the airport system of choice.”

But many local residents, including Indianapolis mayor Greg Ballard, were disappointed in the decision.

“Mayor Ballard has long believed and publicly stated that visitors to our city should be welcomed by a high profile display of public art,” said Mark Lotter of the mayor’s office.

Faust also issued a statement that said in part, “We believe this defiant and perceived underhanded action speaks for itself.” When they opened the new terminal building in 2008, officials at the Indianapolis International Airport (IND) boasted of spending millions of dollars on artwork that included 36 site-specific, permanent pieces that were “intended to serve as a visual gateway to the city.”

But now one of those permanent” pieces – James Wille Faust’s multi-story sculptural painting titled “Chrysalis” is being taken down and replaced with a video wall that will used for advertising and electronic art.

The airport is trying to find a “tasteful balance” between competing interests for advertising income and art and has hired the consulting arm of the Indianapolis Museum of Art (IMA) to help develop a new public art plan, said Carlo Bertolini, director of communications at Indianapolis Airport Authority. “We’ll reveal details about that plan in a few weeks,” he said. “In the meantime, an opportunity was presented to us some time ago to incorporate a video wall in that space and we thought it made sense.”

But the idea doesn’t make sense to some of the commissioned artists and to many local and national arts supporters.

“If the airport wants to present Indiana as a cultural destination and highlight local and national artists, this is the wrong message to be sending out,” said Valerie Eickmeier, dean of the Herron School of Art and Design in Indianapolis. “It’s just kind of insulting to the artist to have work taken down because of an advertising opportunity.”

“I feel [Faust’s] pain,” said Brooklyn-based artist Ron Baron, who created “Baggage Claim,” using suitcases and a miniature diorama of baggage handlers and travelers, specifically for the airport’s baggage claim area. “It’s a slap in the face. Especially because when the building opened there was so much hoopla and celebration of the art and the artists. The irony here is that the museum is involved and they of all people should understand the importance of site-specific art. Now I’m worried what will happen to my art.”

While controversial, airport officials can legally do as they please. As is common in commissioning contracts for public art, the airport reserved the right to remove the pieces. “The artists knew that,” said Julia Moore, the public art administrator at Blackburn Architects, the firm that oversaw the selection of artists and artwork for the terminal. “But I don’t think they knew or thought that less than three years after the airport opened, the airport authority would just change its mind about what they wanted in this prominent spot.”

Moore echoes the comments of others who find it ironic that Faust’s work is being removed in consultation with the IMA. “You’d expect the museum to come down on the side of art,” she said. “The key is going to be what’s going to be there. Is it going to be mostly advertising or mostly art? Or mostly art until advertisers want the spot?”

For its part, the airport authority offered to move Faust’s “Chrysalis” piece to another public building in town. But because the piece was designed specifically for its spot at the airport and “removing, modifying and re-installing the artwork to another location would compromise the integrity” of his work, Faust declined.

Instead, the piece will be stored away. A slightly different version of this story first appeared on msnbc.com’s Overhead Bin.