Poems for the sky at Miami International Airport 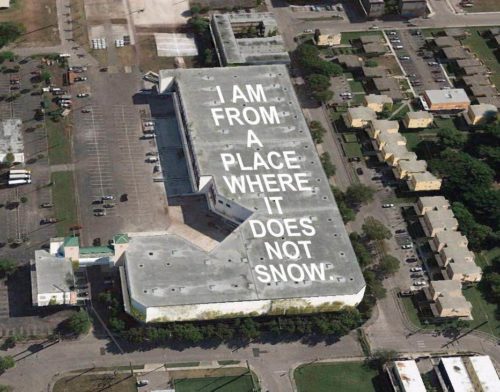 In Miami and St. Louis: fresh art at the airport The 2015 edition of Art Basel Miami Beach, is underway through December 7 and Miami International Airport is doing its part by offering Sisterhood – a new series of portrait/landscape paintings by Miami-based Argentine artist Nina Surel that will remain on display through February 2015 in the Central Terminal Gallery, just beyond the Concourse E security checkpoint. Surel begins with photography and painting and adds fabrics, buttons, jewelry, porcelain and resin on wood to create work that “asks us to look within, to investigate and challenge our views of ourselves, the various roles or characters we play, and, moreover, to explore our notions about beauty and the feminine ideal,” said Dr. Yolanda Sanchez, the airport’s director of the Fine Arts and Cultural Affairs Division.

Meanwhile, at Lambert-St. Louis International Airport, there’s a new exhibition of 23 works by members of the non-profit Missouri Fiber Artists that will run through April 4, 2015 in the Lambert Gallery, located in the bag claim level of Terminal 1.

The works in 3D Fiber Explorations include everything from paper, wool, felt and linen thread to silk, cotton and other materials. United Airlines is scheduled to take delivery of its first Boeing 787 Dreamliner aircraft in September, but if you’re near your computer early Tuesday morning you’ll get to see a live webcast of the plane – and its livery – as it rolls out of the paint hangar in Everett, Wash. Boeing’s 787 Dreamliner will look like this when it rolls out of the paint hangar. Photo courtesy Boeing.

The webcast will air on the United Hub website beginning at 5:30 a.m. Pacific Time.

And if you’re cruising around New York City on Tuesday, head to the pool at Union Square (17th & Park). Yes, the pool. From noon until 6 pm on Tuesday, July 31st, the Greater Miami Convention & Visitors Bureau will be hosting a party at a pop-up pool, complete with DJs, salsa dancers, chaise lounges, beach balls, Cuban coffee, a fashion show, culinary demos and more. There’s also the promise of “trip giveaways and swag.”

Sorry, no live webcast of the pool party is planned. Aviation in Miami: The First 100 Years

A photography exhibit at Miami International Airport (MIA) celebrates one hundred years of flight in Miami, from the first flight in 1911 to the airport’s current status as the second busiest passenger airport in the United States. The exhibit is in the Central Terminal, Concourse E, just past the security checkpoint.