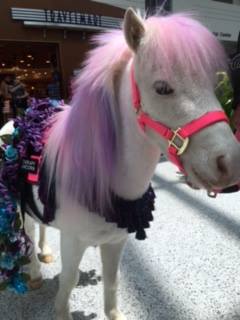 A few years back I had the good fortune to tour Germany’s shiny Dusseldorf Airport.

The early morning visit came on the heels of a long Oktoberfest night and I was having a bit of hard time paying attention and understanding our guide’s heavily accented English.

But I perked right up when we crossed a huge indoor public space and the guide said the word “circus.”

Turns out that on first Sunday of every month Dusseldorf Airport turns its public hall into an event space for the community.

Free events have included a ski jump with real snow, dance festivals featuring celebrities from Germany’s version of “Dancing with the Stars,” a florist championship, sports previews for the summer Olympics and soccer championships, fashion shows and, yes – a circus.

Here’s a highlight they’ve made of some of the past events:

Sometimes, airports are like circuses. In a good way.

BuskerFest is taking place in Toronto this week and the event kicked off on Monday with a mini-busker fest at Canada’s Toronto Pearson International Airport.

Here are some of the fun performances passengers were treated to.

Well, here’s an airport moving in the right direction. Washington’s Spokane International Airport, which serves about 3 million passengers a year, is now offering travelers free Wi-Fi (well, for 20 minutes..) inside the Terminal Building and, starting in September, will be providing baggage carts at no charge.

“In today’s climate, people are unhappy with the pricing models of air travel companies and are suffering from declines in customer service,” said airport director Lawrence Krauter.
“This is just the beginning of our commitment to explore new ways to provide greater customer satisfaction at Spokane International Airport.”

After all, this is the airport that serves as the gateway for the Spokane Fantasy Flight to the North Pole each December for 60 kids and their elf escorts – so you know they know how to have a good time.