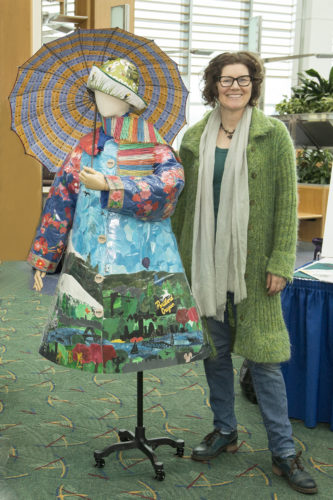 This stormy weather outfit made from disposable coffee cups, parking garage tickets, scrap electrical wire and invasive canary grass is on display at Portland International Airport through the end of April, 2016.

Titled “PDX Weather Advisory,” the offbeat ensemble is the latest trash-to-fashion creation by Nancy Judd, of Recycle Runway, and was commissioned to celebrate the city, PDX airport and the environmental programs of the Port of Portland, which operates the airport.

Judd said the raincoat, which represents the Port’s Waste Minimization Program, is made from disposable cup to encourage travelers to reuse coffee cups, water bottles and other items.

The umbrella, swirling with parking garage tickets, represents the Air Quality Program and its success in reducing emissions from idling vehicles.

The scrap electrical wire woven into the sculpture’s scarf highlight the clean energy programs, while the wildlife photos that make up the hat are a nod to the Natural Resources Program.

And the Reed Canary grass used in the boots is one of the invasive species being managed on Port land.

“PDX Weather Advisory” is on display in the north end of the PDX baggage claim through the end of April.

If you miss seeing it there, you’ll get another chance in 2017/2018 at Hartsfield Jackson International Airport where Recycle Runway will have a year-long show that will feature 20 of Judd’s eco-fashion sculptures.