Our “5 Things We Love About...” series celebrates services and amenities at airports around the country and the world.

Keep in mind that some of the features we love may be unavailable due to health concerns. We’re confident they’ll be back.

If we miss something you love about SDF Airport, or if you have an airport you’d like to be featured, please drop a note in the comments section below.

2. The rocking chairs at SDF

Kentucky is bourbon country and we love that rocking chairs at SDF are made from bourbon barrel staves by local Wood Artisan Jason Cohen.

3. The Virtual Information Booth at SDF

SDF has a Virtual Information Booth staffed by volunteers from the Airport Ambassador Program who answer questions from a remote spot in the airport. A perfect social distance solution to customer service and safety.

Louisville is home to the Urban Bourbon Trail and the Louisville Slugger Museum and Factory.

So it’s good to know that travelers can purchase both bourbon and Louisville Slugger bats in the airport shops.

The SDF Wags program at Louisville Mohammad International Airport kicked off in 2019.

We love airport mascots, plain and simple, and the mascot at SDF – named Skye- is one of our favorites. 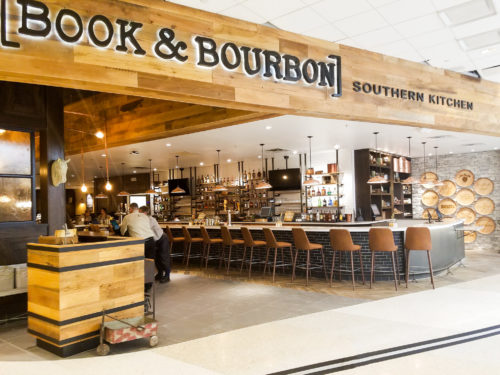