First airports had to deal with a drought of passengers due to the pandemic.

Now airports in many parts of the U.S. West join their communities in facing a summer plagued by water shortages.

But in California, at least, where the U.S. Drought Monitor reports that almost 95% of the state is experiencing severe to exceptional drought conditions, airports say years of conservation efforts make them well-prepared.

In response to past droughts, Charles M. Schulz – Sonoma County Airport (STS) removed grass from many locations, added drought tolerant plantings, and upgraded the car wash facility so that it captures and recycles 85% of the wash water.

“We also installed a system that uses solar panels to run condensing units that extract moisture from the air, stores, and filters the water, and then distributes it through a wall-mounted water bottle fill station in the office,” said airport manager Jon Stout.

SJC’s Topiary Bear Should be Fine

Like many airports, Mineta San José International Airport (SJC) has automatic faucets and low-flow toilets in terminal restrooms. Recycled water is used in restrooms, to handwash the terminal windows twice a year, and to water drought-tolerant landscaping on airport grounds, including SJC’s much-loved topiary bear. Airport spokeswoman Demetria Machado says the cheerful bear is an “SJC staple” that has been greeting travelers at SJC for many years and has survived droughts before.

In addition to low-flow fixtures and water recapture systems for car wash operations, Fresno Yosemite International Airport (FAT) has landscaping that requires minimal maintenance and little or no water usage yet remains visually appealing. And instead of traditional landscaping, the parking lots “have a hardscape design that uses an assortment of rocks to depict a waterway scheme,” says airport spokeswoman Vikkie Calderon.

At Sacramento International Airport (SMF), landscaped areas are watered “at the lowest level possible to maintain viability while minimizing the risk of fire hazards,” says spokesman Scott Johnston, and “concessions only serve water on request.”  Water cannon salutes, which can use up to 4,000 gallons of water and are often used to celebrate inaugural flights or retiring captains, have been discontinued at SMF, as they have for years at San Francisco International Airport (SFO) and many other airports in drought prone areas.

Like every airport NBC contacted, Palm Springs International (PSP), which saves water with waterless urinals and ongoing efforts to make its landscaping desert friendly, stands ready to comply with any new water conservation or water emergency guidelines issued by city, county, or state officials this summer. At PSP, that could means turning off the airport’s iconic water fountain, which it did during a severe drought in 2015.

Aggressive water conservation efforts at Los Angeles International Airport (LAX) are part of the ambitious sustainability action plan adopted by Los Angeles World Airports in 2019. The plan calls for significantly increasing the amount of reclaimed water used for activities such as irrigation and dust mitigation during construction and already seems to be working: In 2020, over 27 million gallons of reclaimed water was used at LAX, a 39% increase from 2019.

San Diego International Airport (SAN) captures, stores, and reuses all the rain that falls on the top deck of its 7.6-acre parking plaza and has a 3-million-gallon underground cistern to capture stormwater from airport property north of the runway.

SAN also currently captures 100,000 gallons of condensate annually from the air conditioning units that cool passenger boarding bridges and the aircraft parked at just 16 of SAN’s 51 gates. That water is used to power-wash the sidewalks in front of the terminals and for other airport washing needs. But in 2019, some of the condensate was purified and used by a local brewery, Ballast Point, to brew a limited-edition beer called SAN Test Pilot. COVID-19 put a damper on new brews made with the airport’s condensate, but the airport plans to get that program back on track post-pandemic.

While parts of Oregon and eastern Washington are experiencing record low rainfall this year, in the Seattle area there is little talk of drought. But as part of its environmental sustainability program, Seattle-Tacoma International Airport (SEA) has two sets of restrooms that use captured rainwater to flush toilets.

Water from the roof is stored in two 15,000-gallon tanks installed during the recent expansion of the North Satellite and will save 2.8 million gallons of potable water annually. “That’s equal to 4.5 Olympic swimming pools,” notes airports spokesman Perry Cooper, “Or enough to supply 300 households with water for an entire year.” 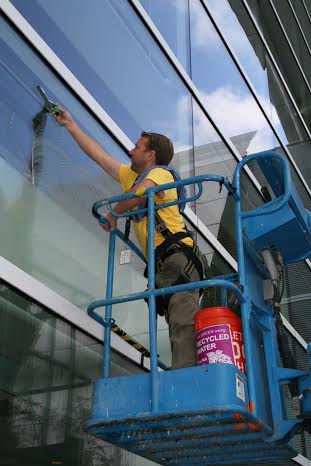 Singapore’s Changi Airport is well-known for having a wide, wonderful and somewhat over-the-top array of attractions for travelers to enjoy while they’re stuck at the airport.

Among my many favorites are the giant indoor slide – And the sunflower and butterfly gardens – 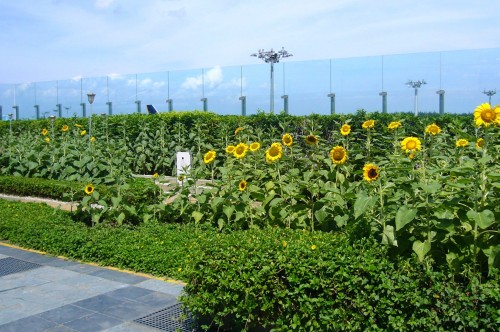 The airport goes all out during the holidays with floral displays and decorations and this year the airport has installed a series of giant topiaries (plants and shrubs grown and shaped into figures and structures) in the form of iconic landmarks from around the world. Look for the Eiffel Tower, the Sydney Opera House, the Temple of Heaven, Singapore’s Merlion and others. I spent a full day this week poking around the brand new Terminal B at Norman Y. Mineta San José International Airport (SJC).  Only some of the restaurants and shops are open. And not all the artwork is installed. But what’s there is pretty impressive.

Here are two fun photos from my tour. More tomorrow. SJC airport may have a swanky new high-tech terminal, but this topiary bear on the entrance roadway has been greeting travelers for years. You must pass the Space Observer before entering security checkpoint