Flying to or through Atlanta? Now is a good time to quit smoking or to get some nicotine gum

My column this week for CNBC is about the last remaining smoking lounges at U.S. airports. Here’s that story.

And, thanks to a new, enhanced ordinance in Atlanta banning smoking and vaping in bars, restaurants and other enclosed public spaces, Hartsfield-Jackson Atlanta International Airport (ATL), which has held the title of world’s busiest airport for many years, will snuff out its smoking lounges on January 2, 2020.

In ATL, which has held the title of “World’s Busiest Airport” for many years, there are currently about a dozen post-security spaces where smokers can light up. The lounges were initially paid for by Phillip Morris in advance of the 1996 summer Olympics.

Although the U.S. Surgeon General has determined that there is no risk-free level of exposure to secondhand smoke, ATL officials have long claimed the lounges benefited non-smokers as well as smokers by keeping secondhand smoke away from non-smoking guests and by discouraging smokers from lighting up in restrooms and other spaces.

But since ATL is part of the city of Atlanta, airport officials say the airport will comply with the new ordinance and convert the lounge to other purposes. Passengers will be directed to smoking areas outside of both terminals.

“We plan to work with our airline partners to make sure they communicate with their customers that smoking is no longer permitted at ATL,” said Jennifer Ogunsola, spokeswoman for Hartsfield-Jackson Atlanta International Airport (ATL), “We also will have PSA [public service announcements] messaging throughout the airport as well as permanent and digital signage with like messaging.”

ATL’s shift to smoke free is “huge,” said Cynthia Hallett, president and CEO of Americans for Nonsmokers’ Rights (ANR) and the ANR Foundation, “As the airport with the largest passenger volume and a huge workforce, both flight crews and airport staff, going smoke free means that millions of people will be fully protected from exposure to secondhand smoke.”

Now, says Hallett, it’s time for the handful of other U.S. airports that still have smoking lounges to follow Atlanta’s lead. “Many airports have repurposed smoking lounges for much desired spaces to sit, including electronic device charging stations or more food options,” she said.

In addition to ATL, a handful of the country’s busiest airports still offer smoking lounges for passengers, despite a report from the Centers for Disease Control and Prevention (CDC) showing that designated indoor smoking areas at airports are not effective in eliminating secondhand smoke exposure.

Washington Dulles International Airport (IAD) has smoking lounges in each concourse. “There is enough customer demand to maintain their presence in the airport and there are currently not any discussions to close them,” said Christina Saull, spokeswoman for the Metropolitan Washington Airports Authority.

At Nashville International Airport (BNA), there are in-store smoking lounges at the Graycliff Cigar Company stores located on Concourse B, near Gate B-10, and on Concourse C, near Gate C-10. Passes to the lounge are $5 for 120 minutes.

For $10, passengers can gain access to the Graycliff smoking lounge by Gate B11 at Cincinnati/Northern Kentucky International Airport (CVG).

At Miami International Airport (MIA), passengers are permitted to smoke in the open-air patio at TGI Friday’s at Gate D36. “Since it is already in an outside area, there has not been discussion about closing it,” said MIA spokesman Greg Chin.

And there are still spaces for passengers to smoke at McCarran International Airport in Las Vegas.

McCarran, which has slot machines in many parts of airport, has enclosed, specially ventilated casino gaming areas on each concourse where passengers may smoke.

“In the past, when there were no such areas, we experienced repeated issues in which travelers would smoke in restrooms, companion care rooms or other public spaces,” said Chris Jones, spokesman for the Clark County Department of Aviation, “ We’d get complaints from parents who would enter such a room to change their baby’s diaper and find it filled with second-hand smoke from someone who’d lit up there minutes earlier, for example.”

Clearing the air in airports

According to the CDC exposure to secondhand smoke has been steadily decreasing in the United States, due primarily to the adoption of smoke-free policies prohibiting indoor smoking at worksites, restaurants and bars.

“However, an estimated 58 million, or 1 in 4, Americans remain exposed to secondhand smoke in areas not covered by these policies, including certain airports,” said Brian King, deputy director for research translation in CDC’s Office on Smoking and Health.

“The good news is that we know what works to protect people from this completely preventable health risk,” King added, “Implementing smoke-free policies in indoor public areas is the best way to fully protect everyone, including airport travelers and employees, from the deadly risks of secondhand smoke exposure.”

Should airports have smoking rooms? 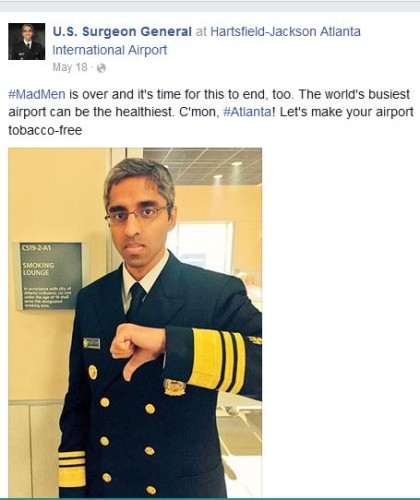 A new online booking tool has rolled out to help smokers find hotel rooms where it’s OK to light up.

Lake Forest, Calif.-based Smoketels.com has a database of more than 250,000 smoking-allowed hotel rooms, said founder and smoker Shawn Bradley. “On existing online travel reservation sites such as Orbitz, Travelocity and Expedia, you have to click on the hotel and then look to see if there might be any smoking rooms,” he said. “That gets very confusing and frustrating. Our inventory only includes hotels where smoking rooms are available.”

An increasing number of hotels, such as Marriott and Starwood, have made all their U.S. properties 100 percent smoke-free. “But many Days Inn and Quality Inn properties — and many hotels in the South, where there are still many heavy smokers — will generally have smoking rooms available,” said Bradley.

In a 2012 survey of 52,000 properties conducted by the American Hotel & Lodging Association, 63 percent reported being 100 percent smoke-free. “But keep in mind,” said Bradley, “many hotel chains that ban smoking in their U.S. properties have smoking rooms available at their properties in other countries.”

Many of the estimated 43.8 million adult smokers in the U.S. who travel will smoke even if they have to rent a nonsmoking room. “They’ll burn candles, use cologne, blow the smoke out the windows, all in an effort to mask the smoke,” said Bradley.

Smoketels.com may have a hard time going up against existing online travel agencies, said Marcello Gasdia, a consumer analyst with PhoCusWright.

“The only way to generate revenue is to steal market share,” said Gasdia. “That’s a tough thing to do when you’re going against entrenched players like Priceline, Expedia or Kayak. Going for a niche audience is one approach, but it’s still difficult to pull any consumer from these household name brands.”

(My story about a new website that lists hotels where it is OK to smoke first appeared on NBC News Travel.