Welcome to Souvenir Sunday, the day we take a look at some of the fun, locally-themed and inexpensive items you can buy when you’re stuck at the airport.

This week: Kit Kats picked up on a very short layover at Tokyo’s Narita International Airport.

Wildly popular in Japan (where Nestle has a Kit Kat boutique), Kit Kats are available in dozens of unusual flavors in addition to the three – wasabi, hot Japanese chile and rum raisin – that we picked up at the airport. 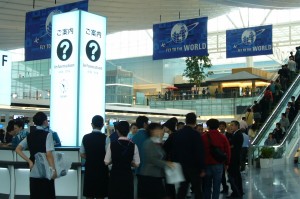 My USATODAY.com At the Airport column this month – Tokyo’s Haneda Airport make life easy for international travelers – is all about the amenities offered at the new terminal that opened at the end of October, 2010 and includes a slide show with close to 20 photos of the new terminal. But this past October, Haneda Airport christened a new runway and cut the ribbon on a swanky new International Terminal filled with shiny arrival and departures halls, gleaming gate areas and dozens of intriguing restaurants and shops.

A robust schedule of international flights to North America, Europe and Asia began rolling out in late October as well. Now travelers can fly to Haneda from Detroit, Honolulu, New York, Los Angeles, San Francisco, London, Paris, Seoul, Singapore and a steadily increasing number of cities on a variety of major airlines. This week American Airlines, which already has regular service to and from Narita, is adding a daily flight to Haneda from New York’s JFK airport.

Flying to Tokyo is one thing. Getting from the airport to the city is another. A frustration of arriving at Narita has always been the hour (or more) it can take to get into town. Haneda Airport is much closer to Tokyo’s center and, with a sleek new monorail and train connections, passengers can now arrive downtown within 30 minutes.

But if there’s no need to rush, stick around. Haneda’s new International Terminal offers posh lounges and a wide variety of other amenities that make it a destination all its own.

Here are some highlights:

Shops and restaurants: honoring the old and the new

Beyond the ticket lobby, but still pre-security, travelers will find two distinct dining and shopping areas.

A shopping street lined with Japanese lanterns and antique-looking facades is designed to evoke a traditional Japanese Edo village. There are restaurants here serving traditional Japanese foods, conveyor belt-delivered sushi, pizza and French bistro dishes. A garden-like setting overlooks the entry hall and offers a quiet spot to enjoy green-tea soft swirl ice-cream from the newest branch of Kyo Hayashiya, a sweets vendor that has its roots in a teahouse established in 1753. The Edo Marketplace shops stock everything from made-in-Japan clothing and elaborate floral arrangements to elegantly boxed gourmet and regional foods and organic cosmetics.

One level above the Edo Marketplace, in the brightly-lit Tokyo Pop Zone, it’s definitely the 21st century. Dining options here include a café with a built-in planetarium, and a branch of R Burger, a fast-food restaurant dishing up Japanese-sauce-topped burgers (pork, chicken, tofu, veggie, salmon, etc.) served on white steamed buns that boast wrinkle-reducing marine collagen among the ingredients.

Tokyo Pop Town also offers some entertaining and unusual shopping. There’s a toy store here with a giant slot car racetrack, a shop filled entirely with JAL Airlines-branded character souvenirs, a huge Hello Kitty marketplace and Design Japan Culture, a showcase for artist-made clothing and accessories that has a vending machine to dispense arty tote-bags and other treats. An outdoor observation desk, free and open to the public, offers great views of airfield activity, including the arrival and departure of the occasional Pokémon character-adorned plane. Back inside the terminal, the amenities include smoking cubicles, a medical clinic and a brightly colored children’s play area where everyone is required to remove their shoes. And in a country well-known for its high-tech toilets, the airport restrooms are a delight. “Ordinary toilets” have wider-than-normal doorways to accommodate both manual wheelchair users and travelers with suitcases. Folding doors on the cubicles include a sign indicating whether or not there’s a baby seat and a fold-down changing table inside. And inside each women’s restroom area there’s a urinal for use by small boys.

“Multipurpose toilets” are exactly that. To accommodate wheelchair users, passengers traveling with babies or toddlers, elderly people and anyone with a special need, there are restrooms equipped with just about every facility imaginable. In addition to diaper changing tables, beds and changing platforms, these restrooms have ostomate showers and sinks, layouts that allow for right or left hand transfers to the toilet seat from a wheelchair and an emergency button linked directly to the airport’s Disaster Control Center. And, in what is certainly an airport first, there’s even a restroom designed specifically for use by service dogs.