You know Harrison Ford as an actor from the Star Wars and Indiana Jones movies.

Avgeeks know Ford is a fan of vintage planes and a licensed pilot.

Now he’s also a big fan and a supporter of Airlink.

The non-profit connects airlines with non-governmental organizations (NGOs) to help get personnel and emergency supplies to sites around the world experiencing natural disasters and protracted emergencies.

We’re not sure if Ford is standing in his airplane hanger in front of his own airplanes to deliver this message of support. But we’re glad he’s learned of this organization and understands its importance. And is helping spread the word.

Stuck at the Airport first wrote about Airlink in 2016. Back then airlines were reaping benefits from soaring passenger numbers and low energy costs. And there was a $15 billion funding hole in global disaster relief.

Disasters haven’t disappeared. And disaster relief is still very much in need around the world. So the service Airlink provides to get personnel and supplies where needed during and after hurricanes, earthquakes, wildfires and, now, COVID-19 is more important than ever.

Lots of major airlines, airline manufacturers, companies, organizations, and individuals support this 10-year old organization. You can too. With a cash donation or by donating frequent flyer miles you have sitting in your account on Alaska Airlines and United Airlines. 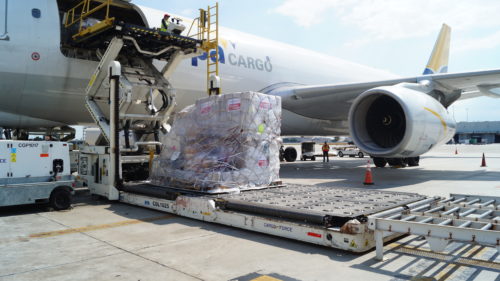