“No warnings”: FAA getting tough with passengers who are unruly or won’t wear masks

Citing “a disturbing increase in incidents where airline passengers have disrupted flights with threatening or violent behavior,” the Federal Aviation Administration (FAA) said Wednesday it will ratchet up its legal enforcement policies.

“These incidents have stemmed both from passengers’ refusals to wear masks and from recent violence at the U.S. Capitol, ” the FAA said in a statement.

The FAA says up to now it has been addressing unruly passenger incidents with warnings, counseling, and civil penalties. (Counseling?)

But effective immediately and through at least March 30, 2021, “the agency will pursue legal enforcement action against any passenger who assaults, threatens, intimidates, or interferes with airline crew members.”

That legal enforcement may include fines of up to $35,000 and imprisonment.

There have been some scary incidents onboard planes recently. Including on Friday, January 8, two days after a mob of Trump supporters stormed the U.S. Capitol building, when an American Airlines pilot threatened to put the plane down “in the middle of Kansas” in response to chanting, unruly passengers.

FAA lifts ban on flights to & from Israel 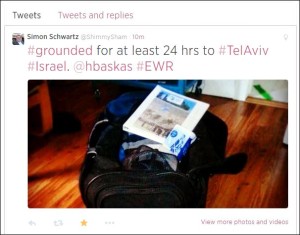 On Wednesday evening – July 23 – the Federal Aviation Administration lifted the restrictions it had placed on U.S. airline flights into and out of Israel’s Ben Gurion Airport. The announcement was effected as of 11:45 PM EDT.

Technically that means U.S. airlines could resume their flights to and from Israel on Thursday, but each airline is now free to make the decision to fly on their own.

Given that the travel advisory Delta posted regarding the unrest in Israel says flights to Ben Gurion International Airport are suspended “until further notice” and both United and US Airways have travel advisories offering a wide window for no-fee changes, it’s possible that one or more of these airlines, as well as many of the international airlines that have announced suspension of service to Israel, will choose to delay resuming flights. Maybe it was a wing and a prayer…

Today the Federal Aviation Administration (FAA) announced a proposed civil penalty of $210,000 against Alaska Airlines for allegedly failing to properly document and tag deactivated systems and equipment before making repairs.

At the same time, the FAA announced a proposed $445,125 civil penalty against Alaska’s regional partner, Horizon Air, for allegedly operating a Bombardier Dash-8-400 aircraft on 45 flights when it was not in compliance with Federal Aviation Regulations.

Alaska and Horizon have 30 days to respond to the FAA’s enforcement letter and today Alaska Airlines spokesperson Bobbie Egan said the airlines are working with the FAA to respond to the proposed penalties. She also shared these details about the cited incidents.

According to the FAA, Alaska Airlines did not properly document when the approved alternate procedure was used for making the aircraft safe, for instance while replacing a landing light.

Since receiving the letter of investigation, Alaska has implemented a number of changes to ensure compliance, including revising the maintenance manual, implementing a new training program for aircraft technicians and performing routine compliance audits.

According to the FAA, Horizon did not properly document compliance with an Airworthiness Directive in March 2011 while inspecting an aircraft fitting on one of the engine coverings, which is called a nacelle. Horizon performed the required inspection, however, we did not properly document our maintenance due to a misunderstanding over wording on the work order. (The fitting was located on a spar that attaches to the nacelle.)

The aircraft was immediately removed from service the day after the inspection when we realized we had incorrectly documented the work. The aircraft was re-inspected and found to be in proper order. Horizon has improved its work order for this engine fitting inspection to prevent a misunderstanding in the future.

FAA regulations require inspection of the engine nacelle fittings every 300 flight hours. Horizon is replacing the fittings with an improved part that does not require recurring inspections.

I’m no mechanic, but I do fly a lot, so whether the fines are warranted or not, I ‘m glad to know attention is being paid to everyone’s safety.

Here’s an intriguing idea: the Port Authority of New York and New Jersey, which operates JFK, LaGuardia and Newark International airports, wants to sue unruly passengers who cause major flight delays.  This is the story I wrote Monday for msnbc.com.

Unruly airline passengers at any of the three New York area airports (JFK, LaGuardia and Newark Liberty) may soon have to go to court and pay for the cost of delaying a flight.

“On a regular basis we’re having issues where planes have to come back to the gate because of disruptive passengers,” said Steve Coleman, spokesperson for the Port Authority of New York and New Jersey, which operates the three airports. “We’re looking to cut down on the number of incidents that require police response and reduce the amount of time and money airlines lose because of these incidents.”

Coleman said the airport authority is embarking on a campaign that will include the use of social media, posted signs and other methods to strongly remind passengers to behave and follow the instruction of airline crewmembers.

“Our lawyers are also looking at ways we can take civil action against the most egregious cases,” said Coleman.

The cost per hour to operate a U.S. passenger airline is $5,867, according to Airlines for America (A4A), the airline trade association. “So any delay represents a real cost to an airline’s bottom line,” said A4A spokesperson Steve Lott. If the new policy is enacted, the Port Authority might sue passengers responsible for a delay to pay for the related costs.

In 2011, there were 1.3 million flights at the New York area airports and Port Authority and police responded to close to 400 incidents involving disruptive airline passengers. “Most of those were due to people who wouldn’t turn off their electronic devices, which is a federal law,” said Coleman. Many other incidents were related to smoking and passenger disputes.

“And it’s not just a New York thing,” said Coleman. “This resonates with airports across the country.”

Research conducted by the Airports Council International-North America (ACI-NA) shows that passengers often blame the airport for airline-related delays. “So, certainly the discussion the Port Authority is having is likely to prompt other airports to think about this,” said Debby McElroy, ACI-NA’s executive vice president, policy and external affairs.

The incidents-to-flights ratio at the New York area airports and elsewhere “is actually quite low, but any effort that helps enforce the message of what the laws are will help,” said A4A’s Lott.

Brandon M. Macsata, executive director of the Association for Airline Passenger Rights, said he applauds efforts to reduce airline delays, but it seems somewhat unfair to single out airline passengers for systemwide problems. “There can be numerous reasons why passengers might be responsible for delayed flights, including what happened two weeks ago when a family was escorted off the plane because their daughter wouldn’t stop crying.”

Passengers who interfere with the duties of a crewmember and engage in unruly behavior can be fined by the FAA or prosecuted on criminal charges. Reporting incidents to the FAA is at the discretion of crewmembers, and in 2011, as of October, the agency had taken action on 127 incidents nationwide.

“The Port Authority has not contacted the FAA. So we are unaware of their plans,” said FAA spokesperson Alison Duquette. “The bottom line is that people should know if they behave badly on an airplane they can go to jail or be fined.”

What do you think? Should airports be able to levy fines on unruly passengers who cause airplanes to return to the gate?