Each Friday I have the great pleasure of answering travel questions sent in by readers to msnbc.com’s Overhead Bin blog.

This week the question was about water at the airport. 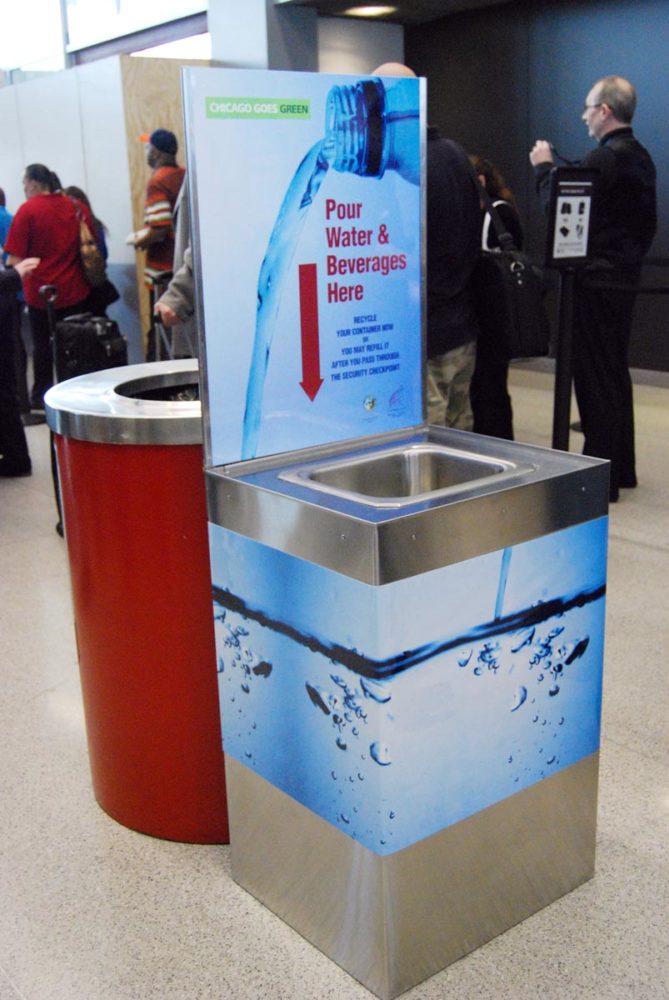 When Heather Snodgrass flies she likes to stay well-hydrated. But she’d rather not add to landfills by buying bottled water at the airport. “I usually see water fountains, but prefer to have a supply of water with me rather than take multiple trips back to a fountain.”

So in preparation for her next trip, Snodgrass asked Overhead Bin: “Can you travel with an empty bottle, such as sports top bottle, and refill it at water fountains past the TSA checkpoints? I want to avoid losing a great water bottle.”

The short answer is yes.

In fact, many airports around the country are actively encouraging travelers to bring their own empty water bottles along, in part because it’s time-consuming and expensive to cart away all those full or half-full bottles, cans and cups that passengers discard at the security checkpoints.

Chicago’s O’Hare International Airport and a growing number of other airports around the country are installing beverage collection stations at the checkpoints to try to cut down on what gets carted off to landfills. “Travelers can pour beverages into the drains and keep the bottles,” said Steve Johnson of Oregon’s Portland International Airport.

For travelers like Snodgrass, who want to make sure they can find a place to fill a water bottle post-security, airports such as San Francisco International Airport and Chicago’s Midway and O’Hare airports are also installing special water bottle refill stations.

SFO has four “hydration stations,” and Chicago’s Midway and O’Hare airports each have two. (The Midway stations are at the entrance to concourses A and B; at O’Hare they are in Terminal 2.) The hands-free, sensor-activated stations at O’Hare also have counters that have been tallying the number of 16-ounce bottles diverted from landfills.

“Together, the two stations at O’Hare have saved 220,717 bottles,” since their installation in June and July 2010, said Gregg Cunningham of the Chicago Department of Aviation.