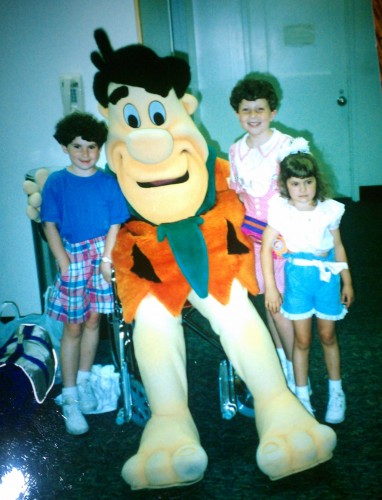 I had way too much fun gathering stories, drawings and photos for this story about first flights that appeared on msnbc.com today.  I know there are lots more great stories – and first flight souvenirs – out there, so after you read these stories, please send along your own.

Julie McKinney does. No doubt other passengers on that flight do too.

It was 1992 and she was “that” kid: the excited 5-year old on her first airplane ride and headed to Disney World. “I was the one singing ‘M-I-C-K-E-Y-M-O-U-S-E’ the entire flight from Pittsburgh to Orlando,” said McKinney.

Now 23, McKinney remembers other passengers singing along. “The singing continued until the end of the flight and I don’t remember anyone getting upset. I think of this now every time I fly and can’t imagine how I’d react to a singing child sitting in front of me.”

Whether it was 50 years ago or just last week, your first airplane ride, like your first kiss, can leave a lasting impression and have an impact on what sort of traveler you become.

Jeff Pecor was also Disney World-bound on his first airplane ride, at age 8, in the early 1980s. Now on staff at Yapta, an airfare and hotel price tracking site, Pecor remembers it being “so cool that they served food and they gave you plastic pilot wings. And everyone was so nice.”

Unforgettable as well: “That first roller-coaster feeling that hits your stomach when the plane sometimes drops suddenly during turbulence. That sensation still gets me today, but it’s altogether different when you’re not expecting the plane to do that.”

Raymond Kollau, who today tracks airline news for airlinetrends.com, first boarded a plane when he was 16, in the summer of 1986. “From the air, the waves in the Mediterranean looked like dolphins,” said Kollau, “And I remember telling my sister she couldn’t walk in the aisle because it would make the plane lean forwards or backwards.” 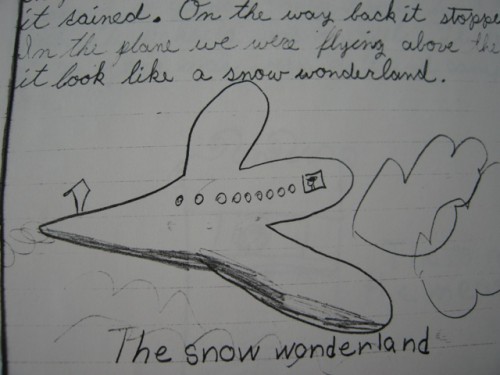 To Boston-based artist Annie Silverman, the world outside the airplane window on her first flight, in 1957, looked like a “snow wonderland.” She even documented the scene in an autobiography she wrote and illustrated in her 4th grade class that year. “It was Christmas vacation and we were all dressed up,” said Silverman, “I remember that the clouds looked like giant cotton balls, the sky was so blue and there was the constant hum of the motor.”
Gum balls, not cotton balls welcomed Thomas Sawyer on his first flight. Sawyer, the bladder cancer survivor recently in the news for his experience with a botched airport pat-down, took his first flight as a young newlywed with his wife, Sherry. At the end of that flight, he realized he’d been sitting on a wad of gum. “The very good looking stewardess attempted to remove it and my wife finally said to her, ‘I think I will take care of that, thank-you.’ She obviously didn’t want this young lady touching my butt. We have laughed about it for 41 years,” said Sawyer.

There was probably no laughing when Orville and Wilbur Wright made those historic first, heavier-than-air powered flights on December 17, 1903. The weather and the wind were bad that day and, according to Peter Jakab, Associate Director of Curatorial Affairs at the National and Space Museum, “Years later Orville said that had they known then what they learned later, they would never have made that test flight under those conditions.”

Still, in preparing for that first flight Orville wrote in his diary, “…Isn’t it astonishing that all these secrets have been preserved for so many years just so we can discover them!!” 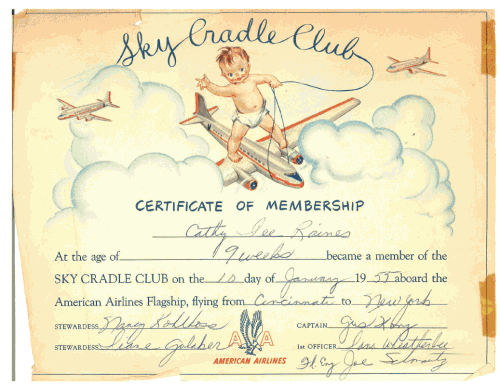 Cathy Raines first discovered flying on January 10th, 1955, when she was just nine weeks old. She’s flown to 45 countries since then. And while she doesn’t remember that first flight, she’s proud to have the Sky Cradle Club certificate issued that day by the American Airlines crew. “There’s a drawing of a baby in a diaper astride a jet plane and it’s signed by two stewardesses, the captain and others,” said Raines.

Although Delta Air Lines recently brought back the tradition of handing out plastic wings to kids and polite adults, most airlines did away with tangible souvenirs such as First Flight certificates and wings as a cost-saving step after 9/11. 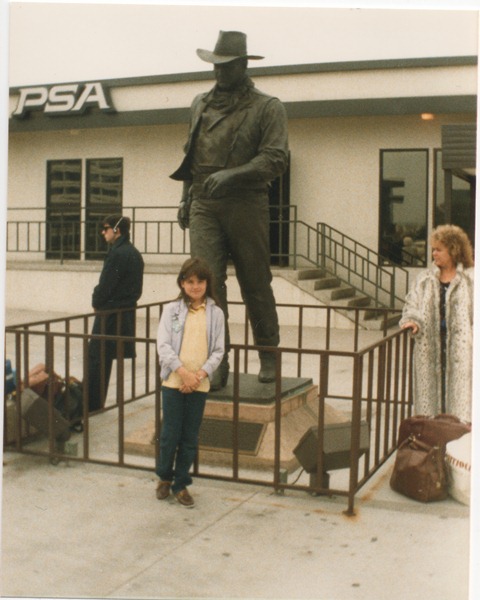 That disappoints American Airlines flight attendant Mary Winking, who has fond memories of her first flight when she was nine years old. “The flight attendants were very attentive and let me help hand out the honey roasted peanuts. I got my first pair of wings that day and still have them with other keepsakes from that first trip to California.”

“I still wish we had the stick-on wings to give out to children and/or a certificate to present to them like we used to,” says Kelly Vrajitoru, also an American Airlines flight attendant. She remembers that on her first flight, at five years old, she held tight to her mother’s hand “feeling my stomach lift as we took off.”

Today, Vrajitoru tries to pay extra attention to first-time flyers, especially kids. “I always offer to have a parent take a picture of their kid with the Captain before take-off or on landing, or to have them sit in the cockpit to take a closer look at all the gears and instruments. I know it makes a special and lasting impression.”

The passenger of the future Jacob Whitecotton, now four years old, got some of that special attention when he took his first flight from Oklahoma to Orlando at age three. For the flight, Jake dressed up in a white shirt, a tie and the kid-sized American Airlines pilot cap his mom bought for him at an airport gift shop.  “It was a blast. He was going through the airport pulling a little rolling suitcase and he looked just like a tiny pilot,” said Jake’s mom, Andrea Whitecotton.

Once on the plane, Jacob got the royal treatment. A flight attendant produced a set of wings from a secret stash he’d squirreled away. Flight attendants and other travelers took pictures. One passenger gave Jake a disposable camera so he could document his flight.

What does Jake remember?  “I got to go in the cockpit and they let me drive the plane.”

What do you remember about your first flight? Please share your memories below.

[This story first appeared on msnbc.com]