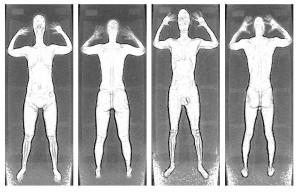 There’s been a flurry of news – some real, some fussed-up – about concerns and confrontations about body-scanners and enhanced pat-downs at airports.

Need to catch up?

This Reuters article explains the concerns pilots have about stepped up screening at U.S. airports.

On his NPR blog, Shots, Richard Knox does a great job of laying out the difference between, and the debate about, the safety of the new scanners.

The TSA blog posted video – and the original radio interview – concerning a young woman who claims she was cuffed to a chair at the Fort Lauderdale International Airport.

This fellow caused a hubbub at San Diego International Airport by refusing the pat-down after deciding to opt-out of the scanning machine.

And there’s a group trying to organize Opt Out Day at airports nationwide on November 24, 2010.

Study up. Things are just going to get curiouser from here…

2 thoughts on “Airport pat-downs, body-scanners, x-rays and you”