A new exhibit at Minneapolis-Saint Paul International Airport is all about the foods and branded edible items that hail from Minnesota and show up on plates around the world. Some of the Minnesota-based brands in the exhibit include General Mills Inc.
Land O Lakes Inc, Hormel Foods, RyKrisp and Summit Brewing Company and, in addition to food items, the exhibit includes reels of vintage commercials and their familiar jingles.

The exhibit opened at the end of April and will run through November 15, 2016 in the art gallery near Gate 12.

So far, “the response has been amazing,” said Robyne Robinson, Arts & Culture Director of the MSP Airport Foundation, “It strikes a chord with travelers – They burst into the Spam song from the 1970’s Monty Python sketch, or playfully spar over which cereal was best – Cheerios or Lucky Charms.” Photos courtesy MSP Airport and and the Minnesota Historical Society 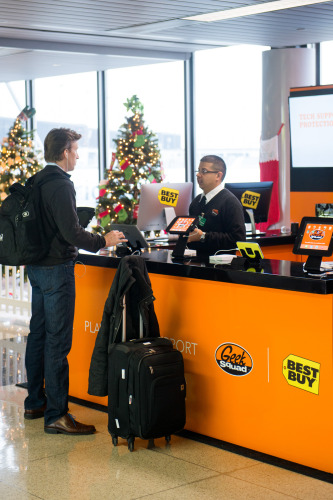 The Geek Squad “Pop-Up Tech Experience” will also include tablets and desktop workstations for going online and offer activities for kids. The three stations are free to use – for 15 minutes at a time – and each has a maximum speed of 2 miles per hour, with a desk, a device charging station and free internet access. One workstation is in the Concourse F Service Center across from Gate F3 and two are on Concourse C across from Fox News near Gate C12.

In the first week the walking workstations were installed over 500 people took a stroll, so let’s hope the airport decides to keep the machines on site beyond the initial 6-month lease.

It’s been tried in the past at airports in the U.S. and elsewhere. Now Minneapolis-St. Paul International Airport is giving virtual golf another try.

This time it may just work! Scheduled to open mid-March, the airport’s “golf lifestyle facility” will offer golfing activities and a lounge, along with retail, food and beverage.

There will also be a restauraunt: Champion’s Grille by Ike’s Food and Cocktail (operated HMSHost).

PGA MSP will be located in Terminal 1, just past security at the north end of the MSP Airport Mall, but plans are in place for day passes to be available for non-flying golfers.

What will it cost?

Entry to the golf lounge – which includes access to the putting green and “business-class” Wi-Fi is $10.