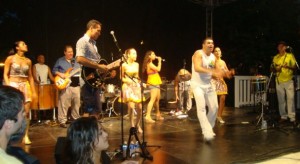 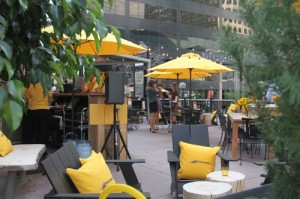 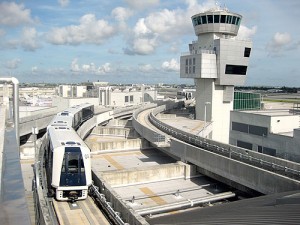 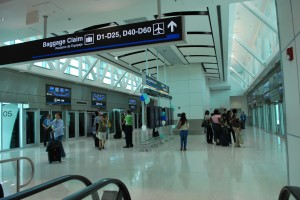 To give travelers a taste of this weekend’s Chicago Jazz Festival, there will be live performances at both O’Hare and Midway on Friday, September 3 from 2 to 5 p.m. Look for the stages set up past the security checkpoints at O’Hare in Terminals 1, 2 and 3, and on the lower level Arrivals area in Terminal 5; and in the baggage claim area at Midway.

The Chicago Children’s Museum will also offer a workshop for kids at O’Hare’s “Kids on the Fly” play area in Terminal 2 on Friday, September 3 from 11 a.m. to 3 p.m.

And as Steve Huettel of the St. Petersburg Times reports, at Tampa International Airport airport officials have decided to continue offering free first-hour parking in both the short and long term garages.

“Currently, no matter how long drivers stay in the garage, the first hour is free. Under the new policy, it’s free only if drivers leave before the hour is up. Otherwise, they’ll pay $3 starting Oct. 15.”

Free is free though, and it’s good news that – for now – this perk is staying in place. In Oregon, Portland International Airport has installed moving walkways that only move when someone approaches. Popular in Europe and Asia, the four energy-saving, auto-start walkways are in the pedestrian tunnels connecting the parking garage to the terminals and are said to be the first such walkways installed anywhere in the United States. My At the Airport column on USATODAY.com this month – UFOS at DEN? is all about aliens (from outer space), UFOs, crop circles seen at some airport and the secret messages in some of the artwork at Denver International Airport Officials insist the 26-foot tall statue of the ancient Egyptian god Anubis now standing outside the Denver International Airport terminal is there to promote a King Tut exhibit opening soon at the Denver Art Museum. But the giant image of the jackal-headed god tasked with protecting the spirits of the dead is alarming some travelers.

“I’m not superstitious, but it doesn’t exactly instill confidence when the god of the dead is staring through the window at you!” says Brian Olson, a Colorado resident who travels frequently through Denver airport.

The Anubis statue, which has also spent time at the Dallas/Fort Worth International Airport, will leave Denver International Airport in mid-August. Staying behind will be several pieces from the airport’s permanent public art collection that some travelers consider ominous and, in some cases, out of this world.

Matt Chasansky, the public art administrator at Denver airport, has watched all the YouTube videos, answered many e-mails and read all the internet postings about the secret messages allegedly embedded in murals, sculpture and other art pieces in the airport. He’s glad people are responding emotionally to the airport’s collection but insists concerns about strange doings at DEN are just misunderstandings. One traveler wrote to complain about the “demons” in the baggage claim area. Those demons are part of Terry Allen’s work, Notre Denver and are European cathedral-inspired gargoyles meant not to harm people, but to protect them from losing their luggage. Other travelers see a secret code in the words and images in 21st Century Artifacts, the four mosaic floors created by Carolyn Braaksma and Mark Villareal for Concourse B. “The piece is actually about geography, archeology and topography,” says the airport’s Chasansky, “And those are Native American words and symbols for the Colorado River and other sites around the area.”

On its website, the airport notes that “a few fanciful conspiracy theories have been generated” by Leo Tanguma’s mural titled Children of the World Dream Peace, but that none of those far-out theories “were intended by the artist.” And both the airport’s telephone-hold message and brochure for the self-guided art tour make reference to the uneasy feelings some travelers get from the glowing red eyes of the 32-foot tall blue Mustang by Luis Jiménez, who died while working on the sculpture. Dubbed “Bluecifer” by detractors, the sculpture rearing up on the road leading to the airport has spawned Facebook pages and campaigns calling for its removal. There are also rumors about the airport’s aliens. The ones that have supposedly come to earth and now live in the hidden underground areas at the airport. “One theory says you can put your ears against the columns in the terminal and hear alien voices from the basement,” says Chasanksy. Another describes how pushing the right combination of buttons on a keypad by the airport’s time capsule will signal the elevators to descend to the aliens’ underground base. Unfortunately for alien hunters, that ‘keypad’ is just a plaque with braille lettering on it.

“All those theories are fanciful and fun,” says Chasansky, “But none of it is true. And the aliens aren’t telling me to say this.”

Unexplained events at other airports

Fanciful or not, Denver International isn’t the only airport said to be visited by aliens. According to Peter Davenport of the Seattle-based National UFO Reporting Center, “There have been many reports which seem to be, in one way or another, associated with airports.”

Larry Bowron, now the Transportation Director for the city of Battle Creek, Mich., says back when he worked at the Scottsdale, Ariz., airport he saw something he still can’t fully explain hover over the runway and then zip out of sight. “It looked like a helicopter, but had no lights on it. All of sudden a white beam of light came on and within two seconds it accelerated and was out of my sight. There was no sound, yet it moved 100 times faster than anything I’d seen in my life.”

Bowron says prior to that experience he was “sort of a skeptic” about UFOs, but “You see something that defies logic and it makes a believer out of you.”

Travis McQueen, manager of Indiana’sHuntingburg Airport, hasn’t seen a UFO, but did jump in an airplane to take some aerial pictures of mysterious crop circles that once showed up on airport-owned land leased to a local farmer. He won’t say whether or not he believes it was aliens or local pranksters who left their mark in the farmer’s bean field, but McQueen did file a report with the local sheriff so that the farmer could file an insurance claim for his lost crops. Then there’s the UFO that may or may not have visited Chicago’s O’Hare International Airport on November 7, 2006. Peter Davenport of the National UFO Reporting Center says he received documents “that left no doubt as to whether the event occurred, or to its bizarre nature.” He estimates that the disc-shaped object seen hovering above Gate C-17 was observed by no fewer than three dozen people, including aircraft mechanics, airline supervisory personnel and others he calls “highly qualified observers.”

The Chicago Tribune and other news outlets published reports about the 2006 UFO incident. Davenport and others call the event “very dramatic” and “very well documented.” The only thing officials at O’Hare have ever said about the possible UFO sighting, though, is “No comment.”

Dance at ORD & MDW, drop your pants at PHL And if you are traveling through Philadelphia International Airport (PHL ) between now and Sunday, March 14th, the Gap store there would like you drop your pants.

Old blue jeans collected by Gap stores nationwide will be turned into cotton fiber insulation.  And anyone who leaves a pair of pants will get a coupon good for 30% off their next denim purchase.

The project is a partnership with the Cotton. From Blue to Green campaign, which has so far turned 200 tons of recycled jeans into insulation for more than 540 houses built in areas destroyed by natural disasters .