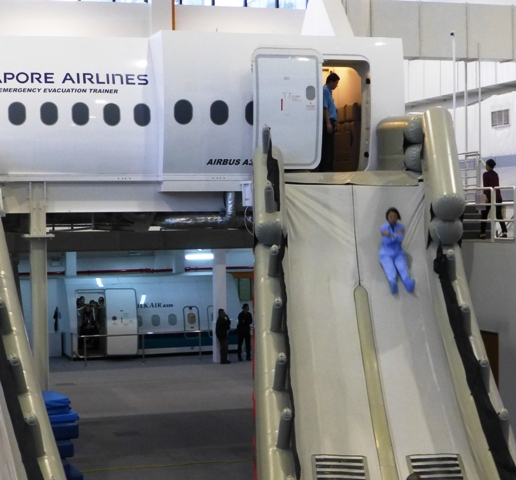 Singapore Airlines may be known for its iconic “Singapore Girl” flight attendants, who have a reputation for grace, beauty and award-winning service, but don’t be fooled — the crew members roaming the cabin are also well-versed on safety and emergency-response procedures.

“We want them to make sure passengers have not just an enjoyable flight, but a safe one,” said safety training executive Joseph Kwok.

Singapore Air’s rigorous training program for cabin attendants includes the study of previous crashes. The details of the Asiana Airlines crash landing at San Francisco International on July 6 are already an informal part of the course syllabus.

“One lesson we can learn from the Asiana evacuation is that it was successful because the crew responded the way they were trained,” Kwok said.

Singapore Airlines’ grueling 15-week training program is one of the longest of its kind — the programs of major U.S. carriers typically last between five and nine weeks.

In addition to classes in grooming, social skills and cabin service, Singapore Air’s course includes a 14-day safety section with classes in emergency procedures, first aid and security and drills specific to different types of planes. At every stage of the program students are tested before they are allowed to move on. 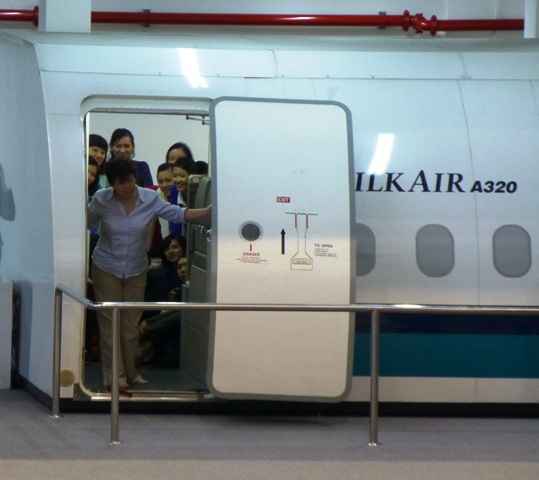 During a visit to the airline’s main training center in Singapore this week, loud yelling could be heard from a training capsule that looked like the cabin of an A320. Students were conducting an evacuation exercise, yelling memorized commands in a precise order.

“The faster you can get people out of the plane, the higher the survival probability,” said Kwok. “That was proven by the Asiana crew.” 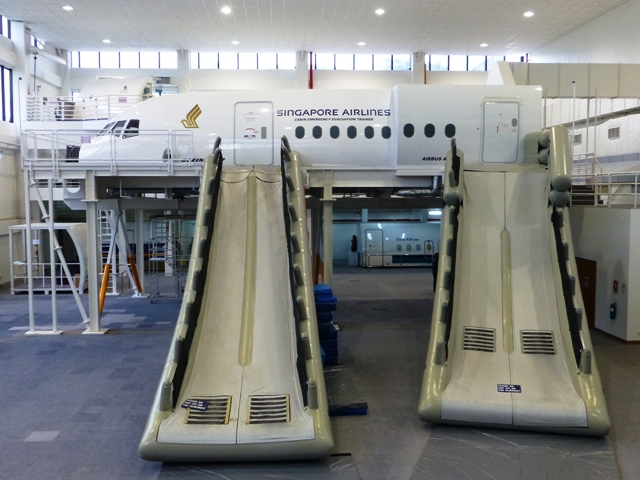 The hangar-sized facility also has a very tall platform with a funny-looking fuselage on top of it — the cabin door section of a Boeing 777 is at one end and a slice of an Airbus A380 is at the other. The height of the platform mimics the average height the cabin doors would be from the ground so that, among other things, students get to experience what it would be like exiting the plane via the emergency chute. 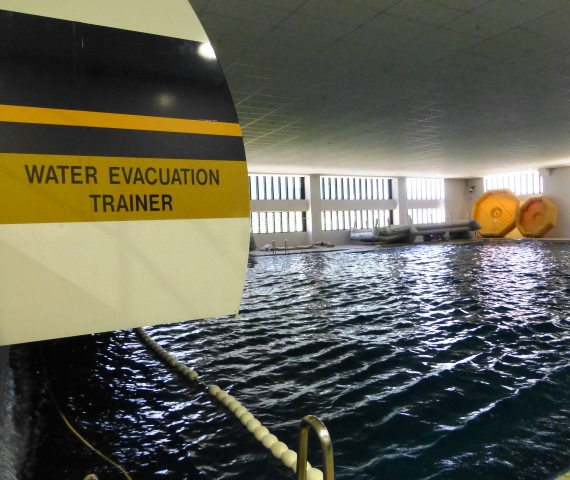 There’s a slight chlorine smell in the hallway leading to the water survival training class, which takes place in a large pool with a wave generator that simulates conditions at sea — “minus the sharks,” said Kwok. Here trainees learn ditching procedures as well as slide-raft boarding and launching. Female flight attendants learn to do this all while wearing the Singapore Airlines iconic sarong-style uniform.

Cabin attendants on carriers in the United States and elsewhere can skip the sarong-swimming lessons, but they must all pass an annual refresher course in safety measures.

In addition to reviewing medical and evacuation procedures, this annual recurrent training often includes discussion of accidents and incidents that occurred the year before. “We discuss what went wrong, how the crew reacted and how they could have done things differently,” said Heather Poole, a flight attendant on a major U.S. carrier and author of “Cruising Attitude.”

In the aftermath of plane crashes, passengers are “extremely attentive,” said Sara Keagle, a veteran flight attendant and author of “The Flight Attendant Survival Guide.” “The difference with the Asiana incident is that the flight attendants seem to be finally getting recognition for the job they did as first responders.”

And while the Asiana crash shines a light on the job performance of flight attendants, Poole predicts fearful passengers will start asking about the experience of the pilots on board.

“But just know,” she said, “flight attendants wouldn’t work a flight if they felt uncomfortable with the cockpit crew.” 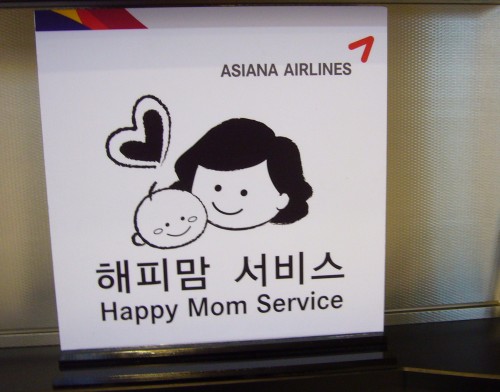 I got in line and found out that Happy Mom Service gives moms traveling with babies an expedited check-in line, complimentary breastfeeding covers and infant slings, and cabin baby seat installation and rental. The service also offers express boarding and express baggage delivery for moms with infants.

Asiana tested the service at Incheon International Airport and at airports in New York, Los Angeles, Seattle, San Francisco, Chicago, London, Frankurt, Paris, and Sydney and last year expanded the service to all airports it serves.