In early January I joined Alaska Airlines for the first scheduled flight to Havana from a west coast city – Los Angeles – in over 50 years. Here’s the CNBC story that came from that adventure. Last week, the newly inaugurated Trump administration warned it was in the middle of a “full review” of U.S. policy toward Cuba—prompting new questions about how committed President Donald Trump will be to the political and cultural thaw began under his predecessor.

However, uncertainty over Trump’s Cuba policy did not prevent American Airlines from opening a ticket office in Havana this week, a mere two months after the carrier flew the first scheduled commercial flight from the U.S. to Havana since 1961.

American’s new outpost in Cuba underscores how both U.S. fliers and air carriers are rushing to make the most of the first real opening between the two countries in decades—despite lingering questions about whether that thaw will continue in the Trump era.

“We cannot speculate about what [Trump’s] next step will be, but I can assure you that we are moving our machine forward,” said Galo Beltran, Cuba manager for American Airlines told the Associated Press, “You are a witness to the investment and how important Cuba is to American as a U.S. entity doing business.”

American began flying to Havana from Miami and Charlotte in late November, and from Miami to five other Cuban cities in September. After a mid-February ‘schedule adjustment’ that drops one of two daily flights between Miami and three cities (Holguin, Santa Clara and Varadero), American will be operating 10 daily flights to six Cuban cities.

Other U.S. airlines competed for the go-ahead to offer service to Havana and other Cuban cities. These include Delta (which in November was the first U.S. airline to open a ticket office in Havana), Spirit, United, Alaska, JetBlue and Southwest, all of which are sticking with their original flight schedules.

“Myriad external forces govern the climate in which we operate – prices of energy, labor,” said Brad Hawkins, spokesman for Southwest Airlines, which currently operates a dozen daily roundtrips between Cuba and the U.S.. As of right now, “Our Cuba flights are performing in-line with our expectations.”

“Cuba routes are performing as expected,” said JetBlue spokesman Philip Stewart, “As has been the case since we completed all of our route launches last fall, we continue to operate nearly 50 roundtrips between the U.S. and Cuba every week on six unique routes.” 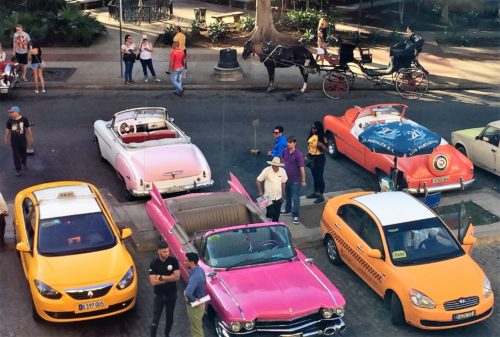 As one would expect from tourists prohibited from visiting a cultural Mecca for decades, many U.S. visitors who now fly to Havana join walking tours through the city’s old quarters, take rides in restored vintage cars and visit the Presidential Palace (home of the Revolutionary Museum), Hemingway’s House and the studios of local artists.

Members of a 50-person delegation of political, business and cultural leaders who joined Seattle-based Alaska Airlines in January, as part of the first regularly scheduled flight between Los Angeles and Havana, indulged in the same.

At the same time, they engaged with their Cuban counterparts, exchanging ideas and business links.

Stephanie Bowman and other commissioners from the Port of Seattle, which operates Seattle-Tacoma International Airport and an assortment of cruise and marine terminals, met with the Cuban Minister of Trade and Foreign Investment and the Cuban Port Authority.

“We learned that with the lessening of trade restrictions and the increase in tourism they have huge challenges in infrastructure development, everything from roads and hotels to being able to provide enough food for everyone,” said Bowman. She suggested the Port of Seattle host some Cuban executives in Seattle “so they can observe our cruise and airport business and take some best practices back.” Kevin Mather, president & COO of the Seattle Mariners, didn’t meet with Cuban baseball officials or players while in Havana. However, he did bring a suitcase full of t-shirts, whiffle balls and other Mariners promotional items to hand out to baseball fans in a downtown Havana plaza.

Mather recognized that scouting for potential players in Cuba is a touchy subject right now, but he’s confident that eventually Cuban baseball leagues and the American Major League Baseball will have an understanding.

“And when the gate opens and the race starts, I want to have a horse to ride,” said Mather. He instructed his office to retain scouts and people well-versed in the Cuban economy “so that when the day comes we can react.”

That “hurry up and wait” lesson is being learned by members of cultural, business, tourism and trade missions heading to Cuba from a variety of U.S cities, said Janet Moore, president of Distant Horizons, which organizes the on-the-ground details for many delegations.

Once in Cuba, “They quickly realize that it’s not quite so straight-forward and that until the Trade Embargo is lifted, doing business with Cuba comes with an enormous set of regulations,” said Moore.

“So feelers are being put out there and relationships forged, but at this point concrete steps are more difficult,” she added.

One thought on “Considering Cuba?”