Here’s my ‘bonus’ At the Airport column on USAToday.com this week: a round-up of some of the holiday entertainment and special offers at airports this holiday season.

Even if everything goes according to schedule, getting to and through the airport can be a real headache during the hectic holiday travel season.To ease the stress and help keep passengers in good spirits, many airports offer holiday entertainment, promotions and contests as well as discount offers at shops and restaurants throughout the terminals.

Here’s a taste of what’s on tap for this holiday season. 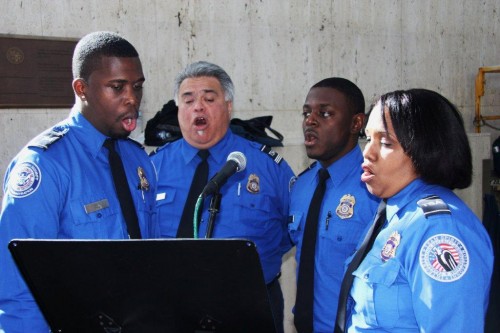 For more, keep your smartphone handy when you travel: Many performances and special offers are still rolling out on airport websites and some events are being posted exclusively on airport Facebook pages and Twitter feeds.

This year it may pay to save some cash – and room in your carry-on – for last-minute holiday shopping at the airport.

San Antonio International Airport’s (SAT) coupon campaign is available online and will be printed on boarding passes. Those with smartphones need only show the coupon on their phones to a participating vendor to use the offer. Dallas-Fort Worth International Airport is also offering discounts to travelers who use their smartphones to scan barcodes on signs throughout the airport.

Minneapolis-St. Paul International Airport’s Holiday edition of the Eat, Shop, Relax guide runs through December 31 and includes more than 80 coupons for some of MSP’s most popular restaurants, shops and services.

At New York’s LaGuardia Airport, travelers can print out or download a coupon good through January 2, 2012 for 20% off an item in a participating store or restaurant in the Central Terminal Food & Shops program.

And, as part of one of the holiday promotions taking place at Boston Logan International Airport this season, travelers are invited to write and submit a letter to Santa in the St. Nick Send Me to St. Thomas contest, which has as first prize a trip for four to St. Thomas.

Most airports have holiday decorations strung up, but Fresno Yosemite International Airport is once again hosting a display of eleven uniquely decorated Christmas trees. This year’s theme is “An Airport Christmas…non-stop adventure” and each tree will be decorated to highlight one of the airport’s non-stop destinations.

At the Fort Lauderdale-Hollywood International, “the holiday decorations are up and the children will be singing and dancing,” reports airport spokesperson Allan Siegel. The airport is getting ready to host its 23nd Annual Winter Festival of Music. From December 12 through December 16th, more than 1,200 children from various Broward County elementary, middle and high schools will be performing throughout the airport terminals.

The seasonal Choral Concert Program is already underway at Pittsburgh International Airport. Performances take place on the pre-security ticketing level of the Landside Terminal and feature choirs and orchestras from local schools and community groups and runs through December 22nd. A series of early morning (6:30 am to 8:30 am) piano concerts continues through December 30th.

TSA spokesperson Nico Melendez confirms that at Los Angeles International Airport, the LAX TSA choir is scheduled to perform December 20th at Terminal 4 and December 22nd in the public area of the international terminal.

Appearances by Santa are expected at a several airports, including Philadelphia International Airport, where Santa will be strolling through the airport and stopping to pose for pictures through Christmas Eve. PHL also promises passengers Victorian carolers, visits from Philadelphia’s famous Mummers, music performances, dance troupes and other entertainment. 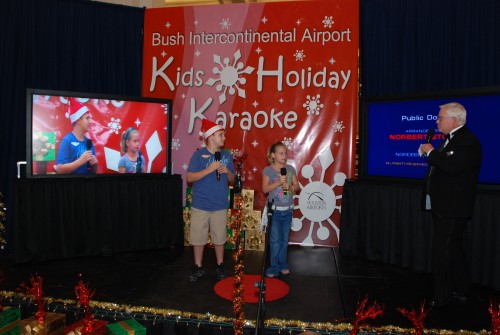 Karaoke at the Houston Airport

Nashville International Airport will fill five stages with holiday-themed performances by the Cremona Strings Ensemble, the Pattie Cossentino Jazz Quartet, The Nashtones, Freeplay, The Billie Gaines Band and others through December 22nd and, each Wednesday and Friday through December 23rd, San Francisco International Airport’s ‘You are Hear’ program will be offering holiday-entertainment at stages located post-security in Terminals 2 and 3 and pre-security in the International Terminal. On Friday, December 23rd, the Golden Gate Bell Ringers return for a performance in the International Terminal.

At Minneapolis-St. Paul International Airport, a storybook-costumed character will read to children at the Red Balloon Bookshop (near Gate C12) December 22-23 from 9 a.m. to 2 p.m., on the hour and half-hour.

Austin-Bergstrom International Airport, which offers 15 live music performances each week throughout the year, has a holiday festival line-up (December 19 through 22) that includes Bishop Sterling Lands, the Judy Lee Dancers (tap-dancers 60 and older), the Austin Jazz Workshop and the Austin Square & Round Dancers.

Passengers (and some airport employees) will help provide the entertainment this year at two airports: Houston’s George Bush Intercontinental Airport opens the mikes for airport karaoke on December 19th and Detroit Metro Airport’s karaoke event takes place December 19-22. “It’s been a big hit in past years, and we look forward to another great week of filling the concourse with the talent of travelers and airport team members while also collecting contributions for a great cause! [the Salvation Army],” said airport spokesperson Scott Wintner.

And, beginning at 6 am on December 23rd, travelers will be serenaded by the Full Measure Carolers and the Rockin’ Cranberries at the San Diego International Airport.