Besides being a shiny distraction for those waiting for their bags at the tiny airport’s baggage carousel, the onion artwork celebrates the area’s most famous crop – Walla Walla Sweet Onions.

You’ll find a few other treats at ALW airport.

In the ticket lobby, a plexiglass case displays a impressive collection of luggage tags one couple collected during their travels. A small alcove filled with photos and clippings tells the history and highlights of the airport, including the day in 1971 when Richard Nixon stopped by on his way to Alaska. And once you pass by security to the waiting area at the airport’s one gate, you’ll find a machine offering complimentary coffee and a “take one/leave one” bookcase. The death on Sunday, October 21st of George McGovern – who ran an unsuccessful campaign for president in 1972 against Richard Nixon – gives me the opportunity to offer a sneak preview of something that will be in my new book about things museums have that are rarely shown to the public.

Tucked away at the  Nixon Presidential Library and Museum in Yorba Linda, California is a plaster sculpture that depicts Richard Nixon and George McGovern arm-wrestling. 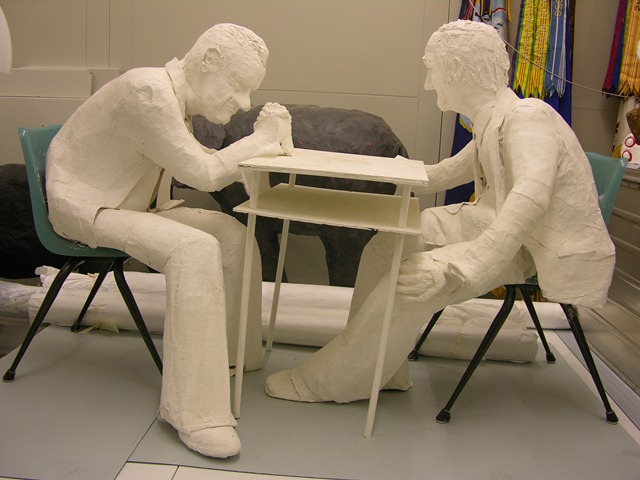 The sculpture was made in 1972 by art students at Lancaster Country Day School in Lancaster, PA. who had just been to see an exhibit of work by George Segal at the Philadelphia Museum of Art. They class traveled to Washington, D.C. to deliver the sculpture to the White House and it is now in storage at the Nixon museum in California with what may be thousands of other gifts given to the former president.

A curator told me that the museum can’t put this sculpture on display because it’s been damaged.

“One of the feet is broken. One of the hands is cracked. We’d need a get a conservator to fix the plaster.”