That’s bad news for those who love the Virgin America overall brand, vibe and amenities. But the good news is that Alaska Airlines is keeping its word and bringing some of the best Virgin America amenities forward.

Alaska says it will adopt “enhanced in-flight entertainment, mood lighting, music and the relentless desire to make flying a different experience for guests” as part of an overall goal to create “a warm and welcoming West Coast-inspired vibe.” 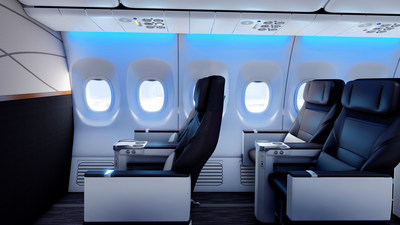 Alaska says it will adopt some other Virgin America touches including introducing music by new artists  on planes, in airport lobbies and at gates (2017); redesigning the cabin with new seats and amenities (2018) and introducing new uniforms by fashion designer Luly Yang (mid-2019) for flight attendants, customer service agents, pilots, mechanics and ground crew.

What do you think?

Early boarding privileges, waived checked bag fees, free flights and upgrades from the back of the plane to the front are just some of the benefits air travelers have come to expect from airline loyalty programs.

Program changes rolled out in 2015 by some major U.S. carriers (notably Delta and United) made attaining the status needed to earn those perks much harder to achieve and experts say in 2016 travelers should expect more of the same.

The news isn’t all bad. Some airlines, most notably Alaska and Hawaiian, continue to award points based on miles flown. Others are adding new benefits for elite members and adding more ways for members to spend banked miles they can’t use in the air.

Here’s a rundown of some changes, new offerings and tips on getting the most of your miles this year.

Sometime in “late 2016” Alaska Airlines will introduce a Premium Class section, which will offer fliers more legroom and some additional perks, including complimentary seating in this new section for elite Mileage Plan members.

“The biggest changes that will affect the most members will probably be award chart changes in March and changing to a revenue-based program by the end of the year,” said American Airlines spokeswoman Laura Nedbal.

Details about the changes are outlined in this release from November, 2015, but Brian Kelly, of The PointsGuy.com, encourages anyone with banked miles in American’s AAdvantage program to spend them on award tickets by March 21.

“That’s when they’re changing the rates and, after that, in most markets you’ll end up needing more miles for an award ticket. In some cases the hike is 80 percent,” said Kelly.

American’s award tickets are good for one year from the date of issue, but Kelly notes you can change your day of travel later as long as you’ll be flying the same route.

According to Delta Airs Lines spokesman Anthony Black, for 2016 Delta has added more international partners for SkyMiles redemptions, expanded its award pricing (lowered prices for some markets; raised costs in others), and is rolling out a program that allows Delta Sky Club Lounge visitors to pay for drinks with SkyMiles.

Some mileage program aficionados aren’t all that pleased with some of the tweaks Delta has been making to its SkyMiles program.

“Right now their system isn’t very consumer-friendly,” said Kelly, “They’ve made it so you can’t just see how many miles you need for a trip and start saving. The goal posts seem to keep changing.”

In 2016, JetBlue will be giving elite TrueBlue Mosaic members complimentary alcoholic beverages onboard and reduced pricing to redeem points for Even More Space seats, according to airline spokeswoman Tamara Young

For 2016, United Airlines is “sweetening the premier qualification bonus for first and business class fares,” said airlines spokesman Rahsaan Johnson, and bringing forward some member benefits it started rolling out late last year, including complimentary beer and wine for 1Ks sitting in Economy.

MileagePlus program members may now also use award miles to pay for in-flight Wi-Fi and buy gifts, electronics and travel essentials at the Miles Shop in United’s Terminal C and Newark Liberty International Airport.
The end of airline loyalty programs? Not quite yet.

Bar-raising changes, point and mileage devaluations and other complicated modifications to airline mileage programs won’t likely make airline loyalty programs more popular with the 65 million U.S. fliers who are members of these programs.

While nearly one third (32 percent) are “mid-tier” members, only 4 percent say they have achieved elite status, said Doug Quinby, Vice President, Research for Phocuswright, and “nearly half (49 percent) have not accrued enough miles to earn any benefits.”
Benefits or not, “loyalty does breed repeat business,” said Quinby.

(My story about airline loyalty program changes first appeared on CNBC.com in a slightly different form.)