Space pens ready? We have travel tips from astronauts. In June I had the great honor of gathering travel tips and other advice from astronauts during a week-long voyage with astronauts and other space-minded people on the Viking Orion, the Viking Cruise line’s newest ship.

The Orion is named after the prominent Orion constellation and has at its ceremonial godmother, American chemist, emergency room physician and retired NASA astronaut Dr. Anna Fisher. As the guest of honor on the cruise Fisher was able to invite dozens of her friends along for the ship’s maiden voyage. 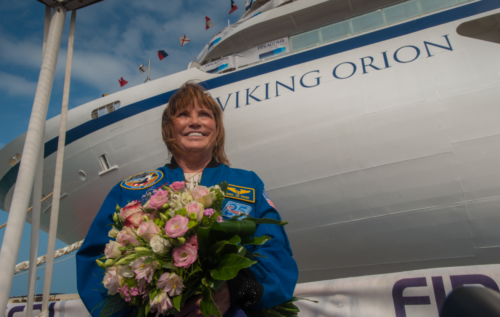 On the ship, I chatted many former astronauts and NASA employees about what it was like to be one of the 550 or so people who have been in space.

Among my questions: What does space travel teach you about being a traveler on earth?

Many of the answers are in my story on Travel + Leisure “9 Travel Tips Astronauts Have Taken From Space to Earth” and below:

“There are many endeavors in this world that would be much better executed if people kept checklists,” said Frederick (Rick) Hauck, a former NASA astronaut who piloted and commanded several Space Shuttle missions, “I have one I refer to every time I travel.”

Don’t pack too much and be ready for anything

Charles Walker, who flew on three Space Shuttle missions and was the first non-government individual to fly in space, suggests travelers keep in mind what may be available at their destinations.

“Both volume and weight are critical for both space travel and terrestrial travel,” said Walker, “Pack lightly.” Keeping a composed attitude is helpful as well. “Be open to what’s around you,” said Walker, “And try to be mentally ready to take in anything and react to it in a calm fashion.”

Jay Honeycutt, former Director of the NASA’s John F. Kennedy Space Center, said his years of observing astronauts and training them for space travel taught him that successful travelers are those who are comfortable with all sorts of people and those who are willing to pitch in when needed.

“Learn to do your fair share of the work that has to be done to make the trip successful and safe,” said Honeycutt, “And make sure you always have some fun.”

Be sure to take in the sights

“In space, you can look out the window and really get to know earth,” said veteran NASA astronaut Nicole Stott, (The Artistic Astronaut), whose was on two spaceflights and spent 104 days living and working in space.

Stott says while space travelers get unique views, there are plenty of awe-inspiring sights here on earth.

“You can go three miles down the road, go to the top of a building, get on a boat or on an airplane and get a new perspective on who you are,” said Stott, who is always disappointed when fellow airplane passengers go straight to the movies, to work or to sleep.

“It’s important to be awake and experience the journey,” said Stott, “And to be surprised by what you can see and feel along the way.”

Have some tips to add? Please add them in the comments section below.