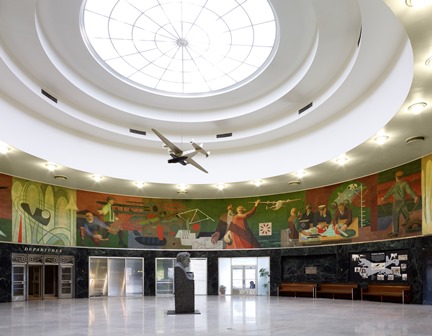 In the new book Murals of New York City: The Best of New York’s Public Paintings from Bemelmans to Parrish

, Glenn Palmer-Smith includes the story of the WPA-era mural Flight, by James Brooks, in the Marine Air Terminal at LaGuardia Airport.

Flight was the last and largest mural produced under the auspices of the WPA and is 237 feet long by 12 feet high and, appropriately enough, tells the story of the history of flight.

“The narrative flows from the mythology of Icarus and Daedalus to the genius of da Vinci and the Wright brothers. Pre–World War II aerial navigators are shown plotting their routes with paper maps and rulers. The culmination of man’s dream arrives at the golden age of the ‘flying boat,’ when glamorous Pan Am Clipper seaplanes would land on water after a flight from Lisbon, Rio, or any city with a sheltered harbor, and taxi up to the Marine Air Terminal dock.”

In 1952, after being on the wall for just a decade, the mural was painted over. It was the height of the McCarthy era and officials at the Port Authority thought the imagery somehow looked too socialist.

“In particular, these self-appointed art critics took exception to the mural’s suggestion that air travel would be available one day for ordinary people and not just the military and the rich,” notes Palmer-Smith.

Lucky for us, the mural had been sealed in varnish and was eventually discovered, restored and finally rededicated in 1980. It’s now listed in the National Register of Historic Places.